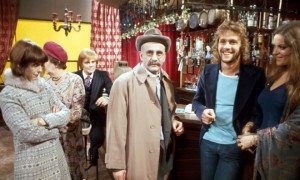 EAR-SPLITTING BIGOTCOM which set out to ridicule the views of the central, West Ham supporting little Enoch, Alf Garnett (WARREN MITCHELL), and succeeded – just about, if you could actually hear what was being said amidst all the bawling and gurning. Most episodes were mainly just front-room debates/slanging matches between Garnett and his left-leaning son in law and “randy scouse git” (ANTHONY “Prime Minister’s father-in-law” BOOTH), and his wife UNA STUBBS. DANDY NICHOLLS, as the far-gone Mrs. Garnett, completed the squalid foursome. When they did venture outside, it was only to go to the pub, or for Garnett to fall out of a window (he spent one entire episode stuck there) or plummet downhill in a wheelchair. Top mouthing off choreographed by writer JOHNNY SPEIGHT. Michael Grade brought the whole melee back in the mid-80s for IN SICKNESS…, to deteriorating effect (literally in Nicholls’ case).