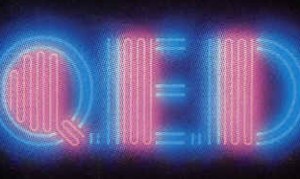 MUCH LOVED BBC popular science series that seemed best served when stuck out after the NINE O’CLOCK NEWS. Although the title was mystifying to many younger viewers (“Kwed?”) ,Q.E.D. found the perfect route between the whisker stroking extremities of the OU and the too populist Doctor MIRIAM STOPPARD and that-bloke-with-the-nose helmed WHERE THERE’S LIFE. While “John’s Not Mad” is undoubtedly the strand’s best-remembered episode, Q.E.D. embraced a wide range of subjects, such as “Why things go wrong” metal bending, what it’d look like to fly all the way round the coast of Britain in a fighter jet, “Understanding Rape”, snooker, and (helpfully) “A Guide to Armageddon”. Q.E.D. also provided some of the first television exposure for Falklands Veteran SIMON WESTON. But best of all on 13 March 1985, that comic imp KENNY EVERETT was given thirty minutes of airtime in which to muck around with Quantel, CSO and other ace mid-Eighties video effects, all in the name of better acquainting Joe Public with how that “Goodnight goodnight goodnight” bit at the end of LES AND DUSTIN’S LAUGHTER SHOW was achieved. Not that all editions were great though; a 1991 episode in which Professor Ian Fells attempted to test “Murphy’s Law” consisted of little more than slices of jam on toast hurtling to the floor and various people switching from one checkout queue to another. However, it was always easy to forgive Q.E.D. the odd whimsical item, especially when an intriguing episode about panic attacks was served up the very next week. Axed in 1998, we fear we shall never see its whimsical-but-serious like again.