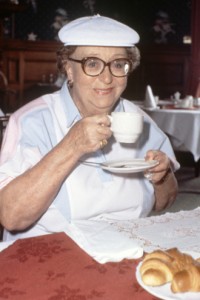 SUMMERTIME STAND-IN for [cref 7225 SONGS OF PRAISE], hosted by THORA HIRD from an oversized armchair in her “home” surrounded by numerous religious trinkets, baubles, bangles and beads. Basically a clip show of ver Praise with the Dame cueing in “requests” from viewers. “A lot of you wrote in asking to see again that wonderfully inspiring performance of Sing Hosannah To The King from that delightfully kept church of St Peter-in-the-Midden in Wessexshire.” Our host would drop in a few gossipy asides, pick her own faves from the archives, tearfully clutch real “letters” from fans, and introduce classic interviews between ROGER ROYLE and (usually) CLIFF RICHARD. Running order would be printed in Radio Times, thereby removing – for those who cared – all element of surprise (“Oh no, and I was hoping for Abide With Me this week!”)