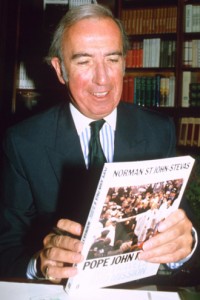 We are but one Sunday school session shy of the Pope’s visit to Britain, the first of its kind for 28 years and only the second of its kind ever.

Much pontificating – ho ho – has been going on over the expense of Cardinal Ratzo Rizzo’s jaunt, but that’s nothing compared to the enormous palaver that was Pope John Paul II’s six-day stadium tour in the late spring of 1982.

If you think they’re incensed over the incense now, consider the mammoth spectacle that his predecessor warranted – not merely in terms of miles travelled by the Popemobile, or patronage from the likes of Norman St John Stevas (pictured), but hours lavished upon JP by the networks.

DAY ONE of the the Pope’s visit to the UK found BBC1 opening up at the unheard of hour of 7.45am.

David Dimbleby (who else?) was at Gatwick Airport along with Cardinal Hume and other papal people.

Coverage continued uninterrupted all morning, including ‘8.30: Departure By Train’ and ‘12.15: Blessing of Crowd’ with commentary from Tom Fleming and Monsignor Treeb-lopez.

There was then almost two hours of coverage of John Paul George Ringo II’s journey “by motorcade” to Buckingham Palace.

ITV did pretty much the same, albeit with Monsignor Peter Coughlan on the mike. The third channel opted not to show “Pope John Paul leaving Buckingham Palace and travelling to St George’s Roman Catholic Cathedral, Southwark, for a special service for the sick and handicapped”, as After Noon Plus was on instead.

DAY TWO found our man visiting Canterbury and live coverage on both BBC2 and ITV all morning. As TV Times explained: “Another hectic schedule lies ahead for Pope John Paul II on this, the second day of his momentous visit to Britain. The Pope, who has endeared himself to millions all over the world – Catholic and non-Catholic alike – visits the cradle of the Anglican faith this morning, Canterbury Cathedral. Here, with the Archbishop of Canterbury, Dr Robert Runcie, he prays for church unity. Later he meets leaders of other Christian churches in Britain.”

You were stuck with BBC2 if you wanted to watch live coverage of the mass at Wembley Stadium, as both BBC1 and ITV were showing Scotland vs England live fom Hampden Park.

DAY THREE saw ITV alone showing the mass at Coventry Airport (“An audience of 700 million will watch the mass on television in every corner of the globe”), but in the afternoon Sunday Grandstand on BBC2 promised a line-up of cricket, golf, show jumping and athletics with Desmond Lynam, plus “visits to Liverpool where Pope John Paul II, after driving from the airport through the streets [what, at the wheel?], is due to visit both the Anglican and Roman Catholic Cathedrals.”

Granada was the only ITV network who bothered covering this, in half hour chunks during live cricket, neither, none and all of which would never merit even half a second of commercial telly today.

DAY FOUR was Bank Holiday Monday and JP’s visit to Manchester. Only BBC2 North West bothered with this from 8.15am to 11.30am, while the rest of the UK had a closedown and Granada bundled out the film Charlotte’s Web.

In the afternoon, coverage of the visit to York was shown on ITV during Bank Holiday Special (i.e. World of Sport), where between the ITV Six and motorcycling with Dickie Davies there was “coverage of the Pope’s arrival at York racecourse, his last stop in England before moving to Scotland and Wales”.

The visit to Scotland was shown on BBC2 from 4.45 to 7pm, with a youth rally at Murrayfield in Edinburgh (“Commentators Tom Fleming, Donnie B MacLeod and FR Bill Anderson“).

DAY FIVE was reasonably quiet, with BBC2 showing the mass in Glasgow from 2.30 to 4.05pm, while ITV’s coverage was only on news bulletins, including at one o’clock, “coverage of the Pope’s visit to a home for the mentally handicapped near Edinburgh”.

However things ballooned again for the SIXTH and FINAL DAY of this evangelical mystery tour.

The pope’s farewell concert at Ninian Park in Cardiff was shown on BBC2 from 3.10pm to 5pm, but on BBC Wales coverage started on BBC1 at 8.30am and continued all the way through until 7pm, with breaks just for the news at lunchtime and teatime, moving test match cricket and the children’s programmes over to BBC2.

On ITV, HTV Wales also provided coverage in the morning from 8.30am, but stopped in the afternoon to show The Derby. On the radio the Ninian Park gig was live on Radio 4, although Radio Wales went for the full, ahem, mass effect by starting its  coverage at 11pm the previous evening, with “music, chat and information until dawn, as Cardiff prepares to greet the Pope”, and continuing non-stop until 5.30pm on Wednesday.

The Beeb’s coverage this year may be fairly exhaustive and indeed exhausting, especially for Ed Stourton, but it’s not quite in the league of ’82.

There’s no Dimbleby for starters – now that’s blasphemy for you. Jesus H Christ!