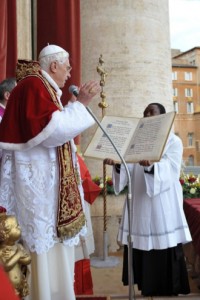 ANNUAL RESURRECTION ROUND ROBIN from His Holiness, piped live into living rooms at 11am sharp on Easter Day. Important enough for whatever would normally go out mid-morning on BBC1 to get temporarily ex-communicated and forced to take sanctuary on BBC2 (even if it’s the Grand Prix). Beatific enough to go out without a translation. C of E types regularly unsettled by double whammy of a) something on telly in a foreign language and b) something on telly in a foreign language to do with a religion that’s not theirs. Granted, Urbi et Orbi (or ‘This and That’) is not really designed for television, consisting as it does of a static shot of an old man reciting a lot of Latin in front of a million people in Rome. Nonetheless when the Beeb dropped it temporarily a few years back, a rift in the space-time continuum opened up in Cardiff Bay, thereby answering Stalin’s question: how many divisions does the Pope have?