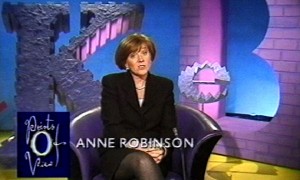 “DEAR BBC, I am quite frankly staggered. Yours, quite frankly staggered.” Endless have-your-say soapbox shoutathon keeping voiceover artistes in work for over four decades and helping fill awkward 10-minute schedule slots historically just before the 9pm news. First in the chrome chair was ROBERT “WOULD THAT IT WERE” ROBINSON, establishing a precedent for ubiquitous surname supremacy later supported by KENNETH ROBINSON, ANNE ROBINSON and, erm, TONY ROBINSON. Early years majored in senior common room-style mutterings thanks to Robert’s penchant for pedantry and obscure literary gags. After long hiatus in the 70s, however, the show evolved into the more mass market, mass hysteria beast it remains. BARRY TOOK takes the blame here, pushing jocularity and funny voices well to the fore, topped off with whimsical calliope adaptation of “When I’m 64” as theme tune (in turn prompting a letter every six months wondering “Why have you got ‘When I’m 64’ as your theme tune?”) and having the correspondence unceremoniously torn into bite-size portions and glued to pieces of brown sugar paper, to be comically interrupted at will (“What’s that, Mrs Chateris?” “Surely not!” “Anything else to add?!”). These were the imperial years, continued by Anne with her “them upstairs” routine and shifty winking-to-camera goodnights. Formula got diluted throughout the 90s thanks to ever-changing roster of boring guest hosts, until ultimately it got bumped to Sunday afternoons (bad) and taken over by SIR TERENCE OF WOGAN (good).