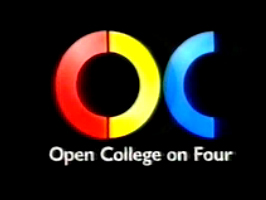 THE Open University for anyone not predisposed to quadratic equations and the joys of Sophocles in the original Greek. Catered shamelessly for the “life skills” constituency, i.e. mature students, thick students, students used to working with their hands, and lazy bastards. As you’d expect, lots of snobbery was directed at it from Russell Group-educated pundits, especially when GAZ TOP capered on screen in the inaugural transmissions wearing brightly coloured overalls. Just as the OU was very much a product of its Marxist, woolly-faced era, so the OC was of the late ’80s – corporate sponsorship kept it afloat while it preached to the signing-on masses the virtues of getting on their educational bikes, Tebbit-fashion. One of the early programmes was even called I COULD DO THAT, in true Yosser Hughes-style optimistic fashion. Programmes divvied up between lunchtime slots on Channel 4 and – erk – early morning outings on weekend TV-am. FRED HARRIS was deeply involved. Younger types with big hair promised factsheets on how to replace a fan belt. Ident, unlike the OU’s horrendous modernist cacophony, was very much in the pleasant, tinkly, Windows startup mould. Disappeared from the screens, for some reason, shortly before every single college in the country got the right to call itself a university.