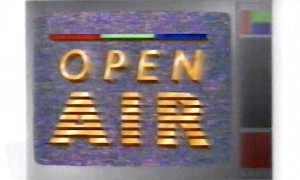 YOU’RE OFF school – again – with an upset tummy. You’ve seen that episode of HOW WE USED TO LIVE at least three times. YOU AND ME no longer excites. And Channel 4 doesn’t even kick off until after lunch. Where else to seek solace but in the ever-welcoming portals of BBC Manchester’s Palace Of Glittering Delights, thrown open to all and sundry for an hour every morning to let the green-biro brigade sound off about last night’s telly. At the helm, the thinking man’s Pat Butcher PATTIE COLDWELL, BOB WELLINGS and an early incarnation of EAMONN HOLMES. Guaranteed regulars: MICHAEL GRADE or BILL COTTON jovially brushing aside complaints about THE LIVES AND LOVES OF A SHE-DEVIL; “big name stars” from the latest all-action blockbuster drama hitting BBC1 screens tonight, usually RAY BROOKS; behind-the-scenes “exclusives” from the set of NO PLACE LIKE HOME; and someone moaning about too much swearing before 9pm.