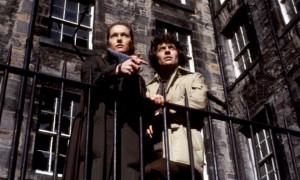 CHIEFLY REMEMBERED for having starred LOUISE “DICKIE DAVIES HAIR” JAMESON fresh from DR WHO as leather-clad inarticulate Leela, this BBC psychic drama revolved around JAMES HAZELDINE, who played a journalist sent to cover a story about a clairvoyant. Unwittingly he begins to display signs of his own psychic power and comes to the attention of an obscure govt department called Department 7, set up to study the paranormal, in the shape of Jameson, JOHN CARLISLE and the intriguingly named BROWN DERBY. Lots of “Can I trust the government? Are they doing experiments on me or being my friends?” paranoia ensues, with rather silly stories all shot on video with loads of over-the-top synth music and sound effects.