Much-loved, much-misquoted and, perhaps most importantly, much-wiped PETER COOK and DUDLEY MOORE comic cornerstone now so entrenched in the constantly repeated, never-bloody-changing ‘Story of British Comedy’ you might be forgiven for thinking the posh colonial dandy and the diminutive Dagenham sandwich enjoyer are overdue a dose of revisionism up their collective flue. And a lot of the stuff in the ‘what’s left of’ canon bears this out. ‘Quickfire’ NOBA was not. Many of the sketches, as was the style at the time, go on for bloody ages. Parodies of Greta Garbo and overwrought Shakespearean acting take up a third of the programme, producing a couple of cracking lines but surrounding them with reams of woolly faffing about. Cook’s children’s poetry and Moore’s ivory tinklings are all very well, but often as not belong in some other programme entirely. And even stuff that raises more grins per square inch, such as Le Tour Gastronomique de la Route Circulaire du Nord, are hardly the sort of groundbreaking stuff they’re often cracked up to be (that one in particular being Muir and Norden’s Balham – Gateway to the South sketch reheated over a rissole-encrusted gas ring).

But just when your enthusiasm is flagging, out come the macs, caps and pints of foaming nut-grey ale, and the balance of comedy gold is redressed. Yes, they’re all pretty much the same routine, yes they’ve been over-exposed by the clip show junta, yes David Bowie’s always doing the voice in interviews, but despite all this, the flatly whined dissection of back-of-bus nookie, nymphomaniac Hollywood starlets and – oh, yes – ‘ducks in the morning, ducks in the evening, ducks in the summertime’ somehow refuse to fall into the same pit of worn-out over-familiarity as your Hitler walks, Nazi-related name withholdings and near misses with wine bar furniture. To get deep into a top flight Pete ‘n’ Dud sketch (and you’ve got plenty of time – they go on for longer than anything) is to experience both brilliantly inventive, joyfully combative crosstalk comedy, and also some glimmer of that long-gone feeling of a truly nationally-shared telly experience, as if the rest of the country’s in the room, with maybe Princess Margaret chuckling away behind the pouffe. This is where the pair really excel – never mind the elaborate stunts with aircraft carriers, pare everything down to hats, coats, drinks and sod all else (even the pub set only half-exists) and let them get on with it, and you’ve repaid the price of admission ten times over. 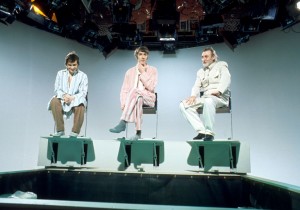 Away from the well-trodden path, you’ve got the genuinely unpredictable father-son dialogues which combine great lines (‘Your mum worshipped the ground I walked on!’ ‘She worshipped the ground but she didn’t care for you, father.’) with weird twists (are those women hiding in cardboard boxes, or are they actually cardboard boxes themselves?) Then there’s the greatest mistimed musical parody ever in LS Bumblebee, a psychedelic song parody that was spot on sonically, but arrived at least a year too soon, with the result that the audience sits, for once, in mystified silence throughout, only chuckling politely when Dud obligingly points at his bum for a cheap laugh. And, forever turning up like a magnetically erased ghost at the feast of reminiscence, there’s Poets Cornered, the end-of-show I’m Sorry, Whose Clue is it Anyway? progenitor wherein Cook, Moore and guest star try and keep an improvised poem going under pain of being dunked in a pre-Crackerjack tank of gunge. Everyone who recalls this remembers it being screamingly funny, and inevitably not a second of it exists. Much like those after-dinner speeches of Cook’s that had everyone in fits but about which no-one recalls a single gag (‘something about a bee, I think…’) too much of this sort of talk can lead to suspicious looks from those who weren’t privy to the originals – a bit like that Leonardo cartoon, in fact. (‘I couldn’t see the bloody joke.’) But if you can put all that annoying Cookie Club in-crowdery to one side where it belongs, there remain enough specimens in the fossil record to give graduate comedy a good name. Probably Doreen, knowing those two.