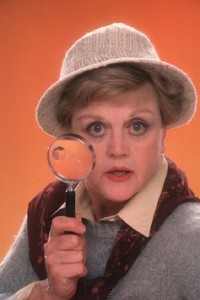 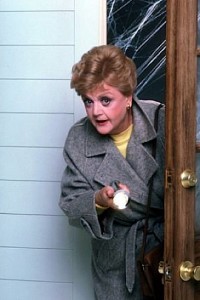 TEA-AND-SLIPPERS SLEUTHERY, best taken over doilies and Darjeeling, if not Lucozade and egg soldiers. Casting aside her leatherbound library of crime, Jessica Beatrice Fletcher would sally forth unto this week’s house warming party/family reunion/community tea dance only to discover a horrible killing, a clueless local police force and a dozen bystanders urging her to apply her literary skills to this real life tragedy. Having taken up mystery writing once widowed and found fame across the States for her seemingly endless stream of treacherous novellas, Jessica also had cause to travel around the country on promotional junkets which coincidentally – and fortuitously for the viewer – also delivered her unto the scenes of yet more dastardly crimes. ANGELA LANSBURY got stolen from over here and made a star over there, turning Murder, She Wrote (that comma was all-important) into a veritable pension plan. The opening titles set the tone majestically: Jessica in a montage of scenes from her escapades, set to the sound of a cheerily tinkling piano and oom-pah orchestra. Approximately 325,671,290 guest stars appeared, including the great TOM BOSLEY in the semi-regular role of Sheriff Amos Tupper and the two-part special when Jessica went to Hawaii and pooled resources with [cref 2899 MAGNUM]. Later episodes saw our heroine taking it easy, “appearing” at the beginning of each episode to introduce that week’s “guest sleuth” then pissing off back to her writing desk. Well, she was almost 90.