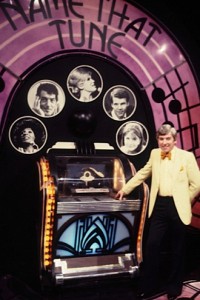 BLESSED WITH THE MOST exciting opening title sequence in history, with flashing lights, blaring music and over a minute of non-stop applause, this was great fun. Two members of the public, “selected in advance for their knowledge of popular music” and everything, would be challenged by TOM O’CONNOR to identify songs performed by THE ALAN BRADEN ORCHESTRA, the lovely MAGGIE MOONE and Eurovision flops SHEEBA. The bit everyone remembers was the opening round where the amount of cash to be won was determined by a spinning wheel, making a somewhat unsettling nee-naw noise, with another wheel spinning around it to decide if it would be doubled (“Double, double!”). Later came the “I’ll name that tune in four… three… two!” business, although this was often less thrilling as the contestants would normally already have worked out the answer from Tom’s clues. Eventually the winner would be holed up in a soundproof booth and have to identify a tune played by a pianist off some sheet music with the title covered up with masking tape. The usual tellies, fitted kitchens and Mini Metros were on offer. Originally played as part of variety miscellany WEDNESDAY AT EIGHT, its host came with it when it span off into a show in its own right, but when he left for the Beeb, LIONEL BLAIR took over and it was never quite the same. But it was still better than the JOOLS HOLLAND-fronted revival on Channel Five in 1997, which nobody liked and ended up in the middle of the night.