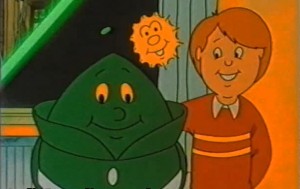 NONSENSE-TALKING GREEN TESTICLE-SHAPED ALIEN visits Earth and Sidney “Skeets” Keats, a generic suburban boy with a slightly Children’s Film Foundation cockiness about him. Adventures ensue, courtesy the pen of Matthew ‘Not the Jet Set Willy bloke’ Smith. ‘Greenie’s obligatory sidekick was a strange sun-shaped giggler called Zoom-Zoom who could fly and render portions of his body invisible. Straight from the soggy end of CITV’s mid-’80s revamp which gave us the demented likes of Erasmus Microman and Chish ‘N’ Fips. Usually shown in a twofer with The Giddy Game Show, which must have been nice. Blessed by the lisping larynx of JON P’TWEE, who gamely rose to the meagre challenge of rendering ‘Skeets’s mockney banter and the eponymous offworlder’s Bill-and-Ben-on-helium abstract expletives. Cursed, on the other hand, by everything else, especially the most feeble excuse for a theme tune this side of That’s My Boy!, to wit – one echoey provincial drill hall full of bored-sounding child choristers backed by a tinny Bontempi organ, half-arsedly trilling a meat-and-potatoes plot spoiler ditty hastily tacked onto the melody of I’ve Got a Luvverly Bunch of Coconuts, and recorded with the condenser mic of a beaten-up Amstrad Studio 100 placed at the far end of the adjacent gents’ latrine. Surely The Pert deserved better dotage fodder than this?