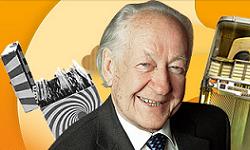 STARTED off as your standard-issue ‘swinging hits of the Flower Power days of Merseybeat, daddio!’ run-through of the hits of yesteryear, most of them also to be found on the handful of surviving Top Of The Pops clips from the sixties, under the stewardship of former Ready Steady Go mainman Keith Fordyce. Then Simon Dee took over for a bit in the late eighties, adding at least a flavour of pirate radio-era presentation magic until he predictably fell out with the producers. Then came a rotating roster of guest ‘names’ from the decade including Sandie Shaw and Viv Stanshall, who insisted on playing some of the more obscure offerings made by their pop pals amongst all the predictable big hits. This set the turntables in motion for a complete reinvention in 1990 under the watchful eye of ‘Your Old Pal’ Brian Matthew and Roger ‘The Vocalist’ Bowman, going all Record Collector on an unsuspecting early morning audience and subjecting them to a playlist as likely to feature Tinkerbell’s Fairydust, Yvonne Baker and The Waltham Green East Wapping Carpet Cleaning Rodent And Boggit Extermination Association as it is Herman’s Hermits. Regular features include people asking to hear singles that nobody else believes actually existed, the seemingly never-ending and increasingly alphabetically tenuous ‘A-Z Of The Beatles’, and, of course, The Shadows’ closing burst of Foot Tapper extending well into the timeframe that you thought the news would have begun in.