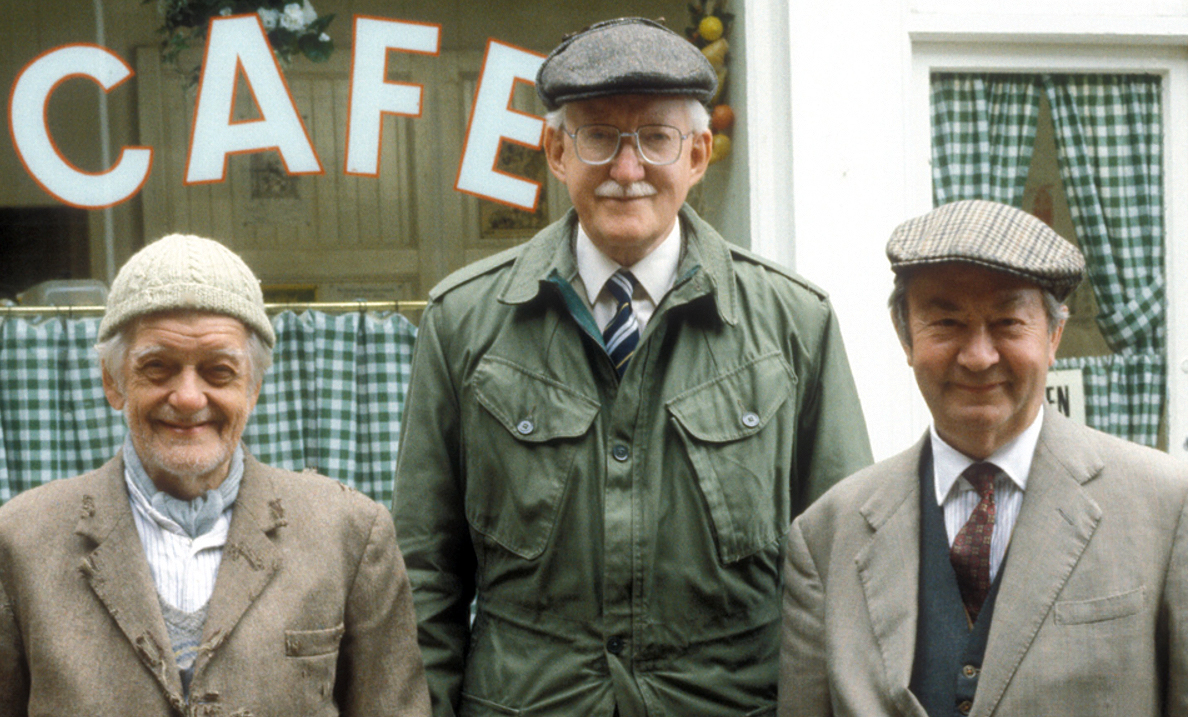 OH LOOK, Compo tries to catch a glimpse of Nora Batty’s night attire and then ends up in a bath on wheels careering down a hill. To the casual viewer, LOTSW seemed to take place half a mile down the road from the similarily libidinous fuelled antics of Arkwright in Open All Hours. Indeed both series began transmission in the same year and both sprang forth from the pen of ROY CLARKE. To most, it’s been one long, unchanging thirty seven year Sunday night monolith of placid Pennines, plaintive harmonicas, wrinkled stockings and gravity-driven porcelain. But familiarity has bred not only (in a few cases) contempt, but a gross simplification of the four very distinct ages of Summer Wine.

Building on the moderately successful Comedy Playhouse pilot The Last of the Summer Wine, which did reasonable business despite being buried in the unforgiving wilderness of early January, the first two series paired Norman Clegg (PETER SALLIS) and Compo Simmonite (BILL OWEN) with MICHAEL BATES’ austere, authoritarian Blamire, for a series of bucolic, rambling ‘second childhood’ picaresques, in which the trio would hang about in and out of Holmfirth much as proper teenagers would have done if there’d been any, reminiscing, arguing, and generally mucking about. Even by Clarke’s slow burning standards, this was gentle comedy indeed, with few belly laughs to be had, or even outright gags: if your stomach makes involuntary spasms at the sound of the words “bittersweet character comedy”, look away now. But for all that, this early incarnation was pleasant enough, and it’s still worth catching when it scuds idly by on the cable channels, not least for the surprise “I don’t remember it being this political!” moments when staunch Tory Blamire locks ideological horns with a very bolshy socialist Compo in deserted churchyards, with Clegg, as ever, caught uneasily between the two.

Faltering health saw Bates out and BRIAN WILDE’s bluff ex-serviceman Foggy Dewhurst in, initially giving a softer edge to the three-way al fresco bickering under the aegis of comedy supremo Sydney Lotterby. The supporting cast of locals was built up, augmenting the already long-serving trio of cafe owner Sid (JOHN COMER), curtain-twitching Ivy (JANE FREEMAN) and the inevitable gargoyle on the front steps that was Nora Batty (KATHY STAFF). But still, it was mainly about your three rambling duffers, traversing hill and dale in an already set-in-stone format. Changes, however, were afoot. For the 1981 Christmas special, two things happened: the theme tune gained lyrics (which didn’t catch on), and a new producer in the form of populist Hitch-Hiker’s fan hate figure Alan JW Bell (who did). Bell upped the comedy clowning ante, eliding Owen’s already noted ability to fall off a dry stone wall in a hundred different positions with Foggy’s idle dreams of restaging the D-Day landings once a week. Increasingly outlandish Compo-carrying contraptions were manufactured from waste materials, among which, it must be said, tin baths did feature once or maybe twice. But viewers were still mainly there for the to-and-fro bickering, now got down to a fine art by Clarke, even if it was already getting a tad formulaic. (The ‘sounds like a gag but it isn’t’ repetitive whimsical construction, e.g. “I’m quite partial myself to an Eccles cake. It sets you up for the day, does an Eccles cake” was guaranteed to crop up around once every ten minutes.) The slapstick did one important thing – it got the kids watching, and thus the whole family. Perhaps most importantly, a move from midweek to Sunday nights helped cement that homely, mellow quality. (Or exacerbate that hatefully drab, purgatorial, it’s-either-this-or-draw-a-diagram-of-a-pigging-glacier-for-tomorrow irritation, depending on your age.) Compo and Nora turned up in character on every BBC show going, from Pebble Mill to Crackerjack to It’s a Knockout to that sure sign a sitcom has arrived, the 1984 Royal Variety Performance. A brand was slowly, quietly forged in the Holmfirth hills. It was all – literally – downhill from here.

Wilde, by many accounts never the most joyous of actors to work with, ups sticks and leaves in a huff soon after his name slips down the running order in the Radio Times. The Holy Trinity is rent asunder. It seems all is lost. Then Bell has the bright idea of simply bunging in MICHAEL ALDRIDGE as Seymour Utterthwaite, basically a Foggy clone with inventing rather than military planning as his shtick, and everything carries on as usual. Then Wilde comes back, and everything carries on as if everything hadn’t previously been carrying on as usual. Owen gets too old to do stunts himself. The repertory cast is expanded with the addition of THORA HIRD’s respectable gossip Evie and perennially outed rural canoodlers Howard and Marina, the latter of whom seems to have once had a thing for Cleggy. (“Eee, Norman Clegg, tha’ was!”) First of the Summer Wine, featuring the youthful escapades of the gang, and thus surely missing the point of the original series in the first place, comes and goes to little interest, but the brand rolls on undaunted. It becomes clear to all that only a nuclear war will put an end to the franchise, and every other comedy starts to take the piss out of it as a matter of course.

Time, inevitably, starts to catch up with the programme. Wilde checks out in 1997, to be replaced by FRANK THORNTON’s Truly Truelove. The casting of the locals heads down progressively more familiar paths, with the likes of STEPHEN LEWIS, ELI WOODS and JIM BOWEN drafted in. Come the new millennium, the unthinkable happens, and Owen finally snuffs it. Much talk wafts round the media of how the show can’t possibly go on. To nobody’s surprise at all, the show goes on, with a brief bit of continuity provided by Owen’s son Tom as Compo’s son, er, Tom. By now the series has reached the same shapeless years of perambulating dotage as its protagonists, drifting from Sunday to Sunday without care or purpose, picking up stray retired comic actors en route. Look, there’s BURT KWOUK! Here comes BRIAN MURPHY! Isn’t that NORMAN WISDOM? My God, it’s DORA BRYAN! CANNON AND BALL, as I live and breathe! And so indestructibly on, until the Beeb finally decide to pull the plug for, seemingly, no greater reason than that RUSS ABBOTT’s joined it, thus depriving us of seeing Ardal O’Hanlon, Lee Mack and Peter Serafinowicz in 2030 going downhill on a rusty old iPad or something. Feelings as to its ultimate passing can, we think, best be described as ‘mixed’.