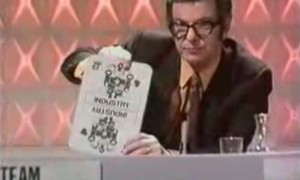 BARRY CRYER (with black hair!) fronted this spontaneous (in the same way that HAVE I GOT NEWS FOR YOU is spontaneous) gagfest from the smudgy-coloured early seventies, devised by regular participant RAY CAMERON. The two teams of top comedians were captained initially by LES DAWSON and TED RAY, then “BIG-HEARTED” ARTHUR ASKEY and, erm, ROLF HARRIS. Simple format – a PLAY YOUR CARDS RIGHT-sized card would emerge somehow from Cryer’s desk. On said card would be a topic for a joke – holidays, mothers-in-law etc – on which the panellists would humorously hold forth, or just flannel until they remembered the joke they’d worked out beforehand. Average stuff, except for the fact it was the only place you’d ever see the worlds-in-collision line-up NORMAN COLLIER, JOHN CLEESE (not looking embarrassed at all) and Askey working together. A “women’s lib” boys-v-girls special was also on the, er, cards, with DIANA DORS captaining the ladies’ team. “Quick-witted chairman Barry Cryer deals the subjects off the top of the pack for a stop-me-if-you-have-heard-this-one joke-telling session between two teams of lively jokers under their resident captains, Ted Ray and Les Dawson. The rules – if you can call them that – are as follows: place seasoned wits in a studio with a smattering of funny stories, offer a card to the comedian and let him tell the joke. Then let the others interrupt and finish the joke for the who picked the card…”