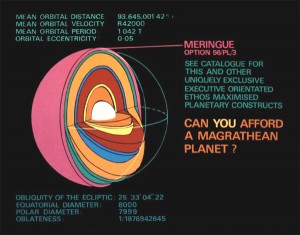 In a nutshell: Douglas Adams’s visionary mix of 2001, PG Wodehouse and a physics A-level paper compiled by Stanley Unwin gets totally screwed in translation from radio original to TV cash in by the bloke behind Last of the Summer Wine, needlessly augmenting the Surbiton in Space mind games with clunky linking dialogue, Rentaghost costumes and Slartibartfast going down a Magrathean hillside in a tin bath.

Well, that’s how history seems to have judged it, but those of us who fell in love with the wobbly-headed BBC2 version before we knew the rest of the oeuvre are obliged to have a crack at a reasonable defence.

It’s obvious what doesn’t work – everything that was never going to work on TV anyway. The budget was beyond handsome for a situation comedy, but still might as well have been zero considering what was required of it. Plus, radio suited the style of Adams’s stuff as well as it’s scope – he could rewrite in the studio as last minute whimsies reached him from wherever that nail order company he got his ideas from was based, and producers like John Lloyd and the Radiophonic Workshop folk matched his chaotically playful working methods stroke for stroke.

On telly, spaceships had to be built, studios booked and lines treble checked. Not such a great incubator of idle, capricious inspiration, all told. And the bits everyone loves, Rod Lord Studios’ non-digital animations, were possibly the nearest in working methods to the radio episodes – made in virtual isolation from the Beeb’s time and motion men, stuffed full of extra-curricular silliness micro-whimsies, and pretty bloody fantastic in its own right to boot. (Having said that, if the Beeb’s original in-house efforts at animation, rendered on a BBC Model B of all things, exist on a 5.25-inch floppy somewhere in TV Centre, we’d love to see what in hell that was like.)

It’s true that we have it on the authority of pretty much the entire cast and crew, save for Alan JW Bell, that the entire cast and crew hated the old school Light Ent. liberties taken by the producer, Alan JW Bell.  But to cut the Compo Commandant some slack, he did manage to Marshall some seriously meagre resources in at least the vague direction of Adams’s vision, was as good on the technical stuff as any other BBC staffer was likely to have been, and didn’t stick funny red noses all over the more cerebral passages nearly as much as he might have done (see the film version for details).

And, if were to be scrupulously fair for once, Adams’s original original was as infuriating as it was enjoyable. Think of all the times, especially in the second radio series, where a fine bit of digressionary folderol with Peter Jones series back into the plot, only force the mood to come crashing down with a chunk of Dr Who-esque explanatory dialogue. At numerous points you can hear the plot gears grinding out a workaday connection between one great conceit and the next. (Actually, it’s more likely the sound of the courier’s motorbike revving outside as Adams pulls yet another last second deadline.) Add to that the number of entire situations that really aren’t going anywhere interesting (the whole bird people/shoe shop invasion storyline for instance, and the bizarrely dull non-character of Roosta) and the radio series’s reputation starts to look a tad shaky.

The hitch-hiker universe is fundamentally flawed, jerry built from observational nuggets, half digested New Scientist articles and unused Who ideas. All but the most fanatical (and indeed humourless) fans acknowledge this, yet they love it in spite if itself. Why shouldn’t the same apply to the TV series? Yes, we know Sandra Dickinson was an insane casting choice, and Dave Prowse even more so, and scenes supposedly set in an alien bunker are clearly filmed in fine drizzle on a golf course, and (sigh) That Head never lived up in action to its grand unveiling by Keiran Prendiville on Tomorrow’s World.

In so many ways, the TV Hitch-Hiker’s was an improbably stupid idea. Loads of stuff that only really works when described in quizzically rambling prose had to be visualised in all its full-on silliness, and then sit there for half an hour, slowly falling apart under the studio lights. But so much does work, and in a sort of queasy, possibly even accidental way which made the original transmissions stand out from everything around them, in the way great comedy always should, even in the moments when (whisper it) it wasn’t technically being all that funny. It created its own ramshackle, immersive world in the same way the radio series did, not with found sounds and cod-medieval electronica, but fuzzy CSO matte shots, rickety Meccano-boosted animatronics and M&S blazers with bits of circuit board sewn into them.

(Oh, and we’ve missed the final deadline for rounding off this billing in a satisfactorily pithy way, so if the sub can sling in a randomly ill-chosen reference to towels, tea or sperm whales, that’d be great, ta.)