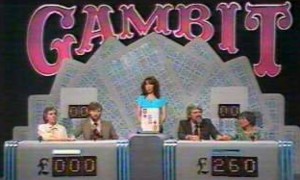 THIS AND [cref 968 SALE OF THE CENTURY] were the only times the rest of the country ever willingly sat down to watch Anglia’s spinning antique knight. Both were unashamedly glitzy affairs (oodles of shining prizes and swooping camera shots in the opening titles; joyous parping theme tunes; whooping crowds of best-dressed pensioners out on an excursion to Norwich; the mind-rattling mellifluous voice of announcer John Benson) but GAMBIT was the one that had the edge in the play-along-at-home stakes thanks to it being, well, pontoon on the telly. With FRED DINENAGE in the big chair. “You got a problem there?” he would bark at nattering contestants inbetween rounds. Nation fell silent in terror. “It’s a quiz show for married couples” Fred explained, matter-of-factly, at the start of every episode. Said twosomes sat at brown desks in front of tiny audience. MICHELLE LAMBOURNE fulfilled Dopey Female Assistant duties. Giant oversized playing cards, perhaps borrowed from [cref 1415 JOKERS WILD], wielded in attempt to add up to magic 21 and bag that elusive dinner plate warmer.