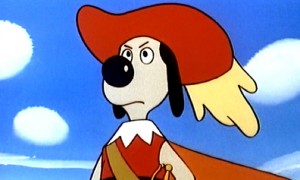 [cref 545 WILLY FOG] might have been testing the limits of literary credibility somewhat, but reworking seminal age-old Musketeer myth as rotten roustabout involving dogs, cats, pigs and bears was taking the fucking piss. The same culprits (BRB INTERNATIONAL) wreaked the same havoc here, to wit: dopey American-esque catchphrases (Dogtanian: “Huh?”); shitty animation (Dogtanian “jogging” up and down endlessly during the credits, codpiece waggling in the breeze like a windsock); stupid sidekicks written in for non-comic purpose (a mouse); more shitty animation (slicing an apple into segments mid-air); cats wearing lipstick (Dogtanian’s bit on the side, M’Lady); dogs wearing lipstick (Juliet); dogs dropping flowerpots on other dogs heads as punishment for sleeping around; dastardly villain with sparkling eyes to remind dim-witted viewer of baddie credentials (Cardinal Richelieu); badly dubbed English voiceovers which had to speak in double quick time to fit words into original Spanish mouths; and deeply deeply deeply fucking irritating theme song which seemingly went on for fucking hours. About 450 episodes long. And still they kept on coming: see [cref 3085 THE MYSTERIOUS CITIES OF GOLD].