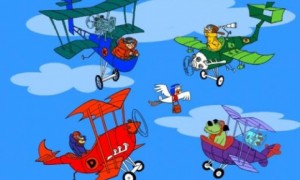 HB’S TOP-RANKING baddie and his doggy in fruitless airborne pursuit of endlessly irritating pigeon with a satchel full of messages. As well as Dick and Muttley there was Klunk, the short inventing one with a neat wrrrpding-brrrd-spleoww speech impediment and Zilly, whose uncontrollable terror caused him to shout “Ohhhh Dear! Ohhhh My!” all the time. Orders were issued by a perpetually apoplectic general who could reach down the phone line to throttle DD when he got stuff wrong. Rarely changing plot was made up of Klunk’s latest avionic wonder failing to do anything other than send the crew hurtling earthwards once more. Best bit was Muttley getting a medal, which happened every week by law, and caused him to float around in an ecstatic trance making squeeky noises.