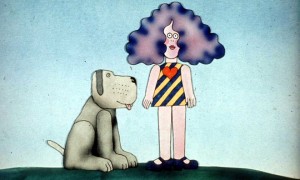 HUGE CLOPPING CUT-OUT nonsense between giant girl and loping dog in a cottage in the middle of nowhere, where two butterflies looked on.