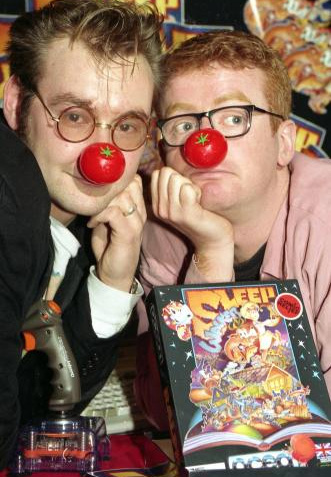 LAUNCHED ON Christmas Day 1985 by NOEL EDMONDS, COMIC RELIEF has, down the years, popularised such phrases as “stick a red nose on your conk”, “pants” and of course “there’s thousands of Amys everywhere” (never as heart rending we feel as Bet Lynch’s “but then there’s the kiddies” on ITV’s short-lived TELETHON).

And never more can an honest citizen walk up a homeless person-strewn backstreet of one of Britain’s major cities without calling to mind the opening piano bit from Coldplay’s Trouble.

Much like IT’LL BE ALRIGHT ON THE NIGHT, COMIC RELIEF has established itself as classic workout fodder for your video remote controller, with the fast forward button deployed whenever JULIE WALTERS/ANNIE LENNOX/BILLY CONNOLLY pops up on screen.

Inevitably over the years, the show has lost all of its edgy appeal, and what was once an unpredictable night of alternative comedy has long since transmogrified into the kind of mutual back-slapping society that retains a shred of artistic integrity, thanks only to the fact that we know it really pisses off ALEXEI SAYLE. For many though, the sad truth is that COMIC RELIEF lost its last vestiges of coolness once there were no more Saturday morning kids shows for LENNY HENRY to piss about on the next day (always a highlight that).

Still, it raises loads of money for good causes, and for that, we’re quite happy to put up with hour upon hour of television that thinks comedy consists of an incongruous celebrity turn up in the middle of a sketch. Make your donation here!