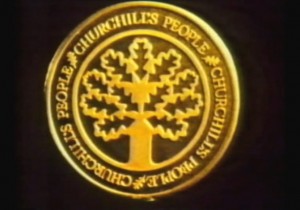 “OI, CHURCHILL! Can you save me money on my quality drama output?” It must have seemed like a sure-fire prestige dramatic endeavour at the time. Nip out to the library, fetch down the whopping four-volume History of the English-Speaking Peoples that Winston Churchill dashed off single-handed (taking a brief comfort break to doff Hitler on the napper), dish out the various historical lessons contained therein to the best writers, directors and actors the Corporation can scare up, add lashings of period pomp and classy costumery, sit back and wait for the pools jackpot of posterity which will surely be yours.

It didn’t quite work out like that, of course. Adapting Winnie’s wonderful wodge of text was a nightmare. Quite apart from the fact that the book, understandably, came loaded with the sort of pro-American, pro-Empire Tory agreeableness that didn’t sit too well with your average crypto-Trot BBC drama operative of the time, it was a bloody dry read, chock full of the requisite details of kings, battles and political upheavals, but a bit light on memorable characters, thrilling incident and snappy dialogue.

So it was up to the adapters to provide these themselves. The results… varied. Though never very far into the ‘any good’ bracket. You can’t blame the writers that much: you try capturing the end of the Bronze Age in fifty minutes of prime-time telly. The People team scrabbled round for ways to make Winnie’s lofty overview resonate with the common man. Having Arthur Lowe play a Celtic barber picking up news of the spread of European Christianity was the sort of thing the early episodes came up with. Dialogue was either of the over-explanatory type (characters telling each other who they were, who their ancestors were, what they’d just done, what they were about to do, what year it was etc.) or packed with comedy anachronisms (Danish Invader: “I’ll smash your face in!”)

Still, BAFTAs have found themselves hanging out of worse than that. What really caused the concept to cark was money. The enterprise was conceived by Head of Plays Gerald Savory (later to become notorious as the arbitrary wiper of much classic drama – funnily enough, all 26 episodes of Churchill’s People are very much still with us) in the heady days of early 1973. The Beeb was booming, drama was going from strength to strength, and to top it all those nice American chappies at Time-Life had offered a little cash help with a new prestige series. Savory made the necessary phone calls, gathered his team, and set the wheels in motion for six months’ worth of lavish epic storytelling.

Then: the oil crisis! In short order, there was a lot less of everything. Especially BBC TV. Still, as Kenneth Williams noted in another classic historical epic, the British are used to cuts, and Savory pressed on undaunted. Everyone indoors! “You can put forty extras wisely in a studio and make them look effective,” he assured the viewers. True, but if you’re not careful they can come out looking like a handful of blokes covered in imitation goatskin milling aimlessly about waiting for the pubs to open. Visually the whole show was touched by the hand of cod. Costumes stood up by themselves, boulders suspiciously lacked inertia when shifted, and primeval fog spewed from barely concealed nozzles over perfectly flat Scottish heaths. The look was supposed to be black cloth austerity stylisation, but there’s no hiding the fact that the concrete floor of studio one is the concrete floor of studio one, no matter how much straw you bung over it. Critics compared the threadbare results to a schools programme – no small insult to the accomplished shoestring recreations of How We Used to Live.

To put the old tin lid on it, the series opened with the least crowd-pleasing fifty minutes of prime time drama ever broadcast. Picking David ‘Penda’s Fen‘ Rudkin, obscurantist weirdbeard pagan expert, to sketch the goings on in 43AD was a courageous choice for BBC1 to say the least. His offering of primitive grunts, long passages of Latin, ritual disembowellings and that all-purpose symbol of edgy 1970s classical drama, loads of severed rubber hands, may have been as historically accurate as the room-size remnants of butcher’s grass and Boots No 7 woad would allow, but it acted like syrup of figs on the ratings. By the time they got round to signing Magna Carta, Alasdair Milne decided enough was enough, and turfed Winston’s chums out of their 9.25 Monday fastness into an ever-changing post-10PM graveyard, parachuting Kojak in to take up the slack. The series did, in fairness, calm down a bit when more recent periods were tackled by less wayward writers (including Roger Woddis on the Wars of the Roses!) but who would ever know? The show crawled on in painful obscurity up to the Peterloo massacre, then quietly fell off the air with nary a polite cough to mark its passing.

Mind you, it’s not without unintentional interest, featuring as it did absolutely everyone who was available for work at the time. Where else could you see Dennis Waterman as King Harold? Fulton Mackay and Michael Sheard as archbishops? Arthur Mullard and Rita Webb speculating on the South Sea Bubble? Or Rodney Bewes colonising the subcontinent? For that alone, it was surely worth both pennies.