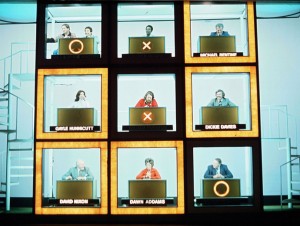 “HELLO CELEBRITIES!” The plea bargain to lure LORD BOB MONKHOUSE back to [cref 879 THE GOLDEN SHOT], “the big box game of stars and cars” was loads more glamorous than his previous archery-based extravaganza, helped by the presence of HERMIONE GINGOLD and VINCENT PRICE in the first show. Basically noughts and crosses on the telly, the game was piss-easy to play along with, especially for the contestants who only had to guess whether Garry Bushell knew the answer to a trivia question or not. The answer’s no, by the way. The first incarnation was enlivened by KENNY EVERETT on voiceovers, who was bored witless throughout recordings and spent most of the time playing Scrabble in the booth with his agent. After four years it ended before returning in the nineties, with Lord Bob still firing on all cylinders but having to put up with a much lower standard of celebrity, like “star of DESMONDS” KIM WALKER, CY “EMMERDALE” CHADWICK or a Chippendale mysteriously billed as simply “CHIPPENDALE” on his desk. Still, seeing Bob trade gags with the likes of YVETTE FIELDING had a curious sort of appeal. Best Bob Catchphrase – “We’ll be back in a flash with double the cash!”