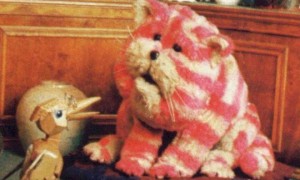 13 EPISODES of sepia soft toy sophistry from the late mind of cardboard scissor-whizz turned latterday environmental doommonger OLIVER POSTGATE. Desperately slow plots always began the same way – with a desperately slow rundown of precisely what was about to happen, depicted in faded prints of the kind they used as props in [cref 1494 NEVER THE TWAIN]. A girl, Emily, then appeared dressed as if it were the 1840s, who for some reason “owned” a shop that sold nothing. Everything – here comes the hook – on display in the window was lost property, watched over by the store’s resident custodian and “old fat furry catpuss”. Said feline – baggy and a bit loose at the seams – was then called upon by Emily in textbook 70s hippy chanting, to “wake up and look at this thing I bring; wake up, be bright, be golden and light!” Bagpuss responded with a huge yawn (securing plus points ad infinitum from bored teenage/student viewers) and the episode proper began. Those shop “assistants” in full: a toad with a banjo (Gabriel – “Oh, look!”); a load of mice on their “marvellous mechanical” mouse-organ; can’t-be-arsed rag doll Madeline; and, hero of the hour, woodpecker bookend Professor Yaffle, whose advanced years meant ambling down a pile of books to examine this week’s curio was hard going. Yaffle’s addled brain would then mistake a pin cushion for an earless elephant, while the mice would turn a doll’s house into a mill for making chocolate biscuits out of breadcrumbs and butterbeans, only to be exposed as a fraud. Such hysteria was interspersed with even more desperately slow songs and stories, before the mice did some genuine “fixing” and restored the piece of junk to its former glory, at which point its actual purpose was revealed and everyone went back to sleep. Show’s legacy far outweighs actual merits of each episode, but “when I produce Bagpuss at my student lectures, everyone cheers!” insisted Oliver, so that’s OK.