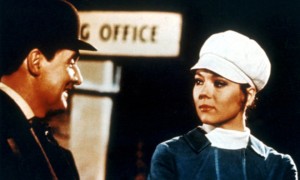 THE FORMAT might have been through the mill countless times, but when it got itself sorted, this was close to the best damn thing on telly. Way back at the beginning the whole thing was taped as live: a bonkers idea that had PATRICK MACNEE, aka John Steed, inching out of shot at the earliest opportunity in order to swap his cumbersome mackintosh for a lightweight morning suit ready for the next scene. Plots involving private zoos and crates of rotting fruit singularly failed to reel in many viewers, but as least the episodes had ace titles like ‘Nightmare’, ‘Square Root Of Evil’ and ‘The Tunnel Of Fear’. The decade rolled on and some supposedly stereotype-bashing judo/leather business came and went, though given it was all still as-live HONOR BLACKMAN (Cathy Gale) shared top billing with Stunt Man In Blonde Wig. ’65 saw a Connery-bound Blackman switched for the magnificent DIANA RIGG (Emma Peel) and here everything clicked into place helped by loads more money and pre-recorded escapades. New titles, new gimmicks, acres of new wardrobes and endless flipping between spy thriller, science fiction and telefantasy all helped, despite proceedings almost always ending up unravelling into a long car chase around the Shire counties. By now loads of people were watching, and even more were talking about it, so when a Lazenby-bound Rigg pissed off the self-appointed power that was, Brian “BUGS” Clemens, pressed on regardless. Sadly what followed was pretty dire: MacNee suddenly looked wrinkled, new sidekick LINDA “20 YEARS OLD” THORSON seemed to have only read her script first thing that morning, and PATRICK NEWELL was conscripted in to play dopey boss Mother, seemingly purely to trot out “Mother knows best” gags. JOHN CLEESE even showed up to dust down his besuited lunatic turn. It all ended with MacNee and Thorson being blasted into space for no reason – “They’ll be back!”.