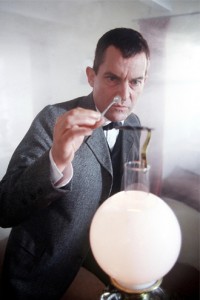 DEFINITIVE SMALL-SCREEN sleuthathon saddling JEREMY BRETT, for good or ill (the latter, as it turned out) with the role of a lifetime. Hard to find a word to say against this meticulously turned-out period perfectionism, at least not during the early years when Brett was on top hair-dyed, rake-thin, pipe-chimney, violin-scratching, blind-fury, arch-pompous, bone-dry-wit form. Accompanied first by the almost too-youthful DAVID BURKE, who regenerated into EDWARD “COLDITZ” HARDWICKE in 1986, here was the humorous (“Watson, this is no time for eating humbugs!”) and the introspective (“It seems death is all around us”) just as thrilling as the discovery of the next dead body. A fully-functioning Baker Street, slung up just round the corner from the Rovers Return and peopled with numerous rozzers, coppers, tinkers and nabobs, kept Granada in pocket to boot. Later years, saddled with numerous name changes (THE RETURN OF…, THE MEMOIRS OF…, THE CASEBOOK OF) and two-hour one-off specials, hampered by less money and Brett’s fading health. Final episodes almost ghoulish in their intimations of mortality. Still, the best of its kind and no fooling, with the finest late-Victorian smog (“Hmmm, it’s a real pea-souper this time!”) on the box.