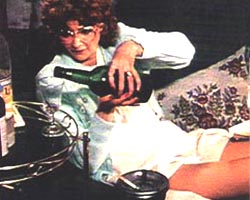 After the relative drop in quality of Who’s Who, Mike Leigh came roaring back to form, first with the formidable 1980 BBC2 Playhouse entry Grown Ups, then with this masterful, low-key study of the tragically interconnected lives of three Hitchin postmen. Gordon Leach (Timothy Spall, son of a postal worker himself) is morose, lazy and in a rut with both his life and argumentative slimmer of the year wife Hazel (Kay Stonham). Harold Fish (Tim Barker) cheerlessly prattles inane jokes out loud to himself and has an even more tenuous relationship with his chintzy, repressed spouse June (Su Elliott). Stan (Eric ‘Sgt Bob Cryer’ Richard) is more alert and (relatively) personable than the other two, but his wife has left him, leaving their daughter Tina in a home, plagued with regular and inconsequential visits from hopeless social worker Melody (Frances ‘Hard Feelings’ Barber).

The loose friendship between the three men finally degenerates when, dodging a visit to Tina, Stan picks up and has sex with Janice, a lonely, lame misfit in a laundrette. He has also had an affair with June in the past, a confession she finally blurts out to Harold who, being the eternal sap he is, is not so much crestfallen as instantly lost to the world, what faltering command he had of his life suddenly whipped from under him. Hazel modestly flirts with Stan, but otherwise she and Gordon continue to argue, he not committing to her desire for a child, consigning their marriage to an endless despairing slanging match.

Finally, Melody walks out on Stan’s case, leaving her colleague and boyfriend Dave (Lloyd Peters) to take over. After a squalid Sunday lunch for the three couples (Tina is Stan‘s plus one, and she witnesses Stan and Hazel indulge in a chaste kiss over the washing up) Dave harangues Stan with a stream of strident yet meaningless socio-speak as the play comes to its appropriately inconclusive end.

Save for Harold’s pathetic comeuppance, there’s little of the sometimes overplayed catastrophic climax present in Abigail’s Party and the like. Instead, like much of blue-collar provincial life, and Carl Davis’ loping score played by the London Double Bass Quartet, there’s a sense, both depressing and, at times, strangely reassuring, of characters either unable or refusing to absorb the meaning of events and undergo the ‘great change’ a lot of conventional drama demands by default. The women wear expressions of sorrowful regret and agonising frustration, the men have only Saturnine lust or uncomprehending blankness on their faces. This, for better or worse, is how it is.

The lead performances are excellent, especially Richard’s, and there’s a remarkable cameo from Sheila ‘Nuts in May’ Kelley as the ghostly, forlorn apparition of Janice. Leigh’s preferred working method – working up character profiles with each actor in turn, then bringing them together in various combinations for a series of improvised rehearsals with which to lay down the plot – is as apt to fall apart as it is to gel convincingly, and here, without either losing its way into cul-de-sac vignettes or winding itself up into a cathartic, violent explosion, it works magnificently.