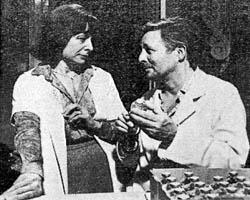 By Brian Thompson. Paul Daneman and Anne ‘Onedin Line’ Stallybrass star as a biology professor and his lab technician in a southern England university in the present day (ie. early doors Thatcher’s Britain), seventeen years into their ramshackle-but-dilligent research into the cure for the common cold, in a run-down Victorian building on the edge of a newly-expanded concrete campus.

On the day Frank (Daneman) rushes to work on his saddle-less bike and excitedly breaks the news to Barbara (Stallybrass) that he feels he is close to a cure, cantankerous trade unionist college porter Cullin (Milton Johns) breaks the news that Frank’s research is for the chop in the latest round of budget cuts. At the same time, a very tentative affair between Frank and Barbara (who is married, but dissatisfied) comes to a head, a new, young female research assistant arrives, and the vice-chancellor engages Frank in a discussion about the social usefulness of his research.

Barbara announces her decision to leave, threatens her conservative PE teacher husband on Cullin, and then turns on Frank (‘I have listened to your fear of me for so long it’s eventually become boring’). All this moves Frank, only ever on nodding terms with the real world anyway, to finally lose it and, his life’s work swiped away from under him, end up on the phone to a middle eastern branch of the Samaritans.

It sounds like a farce, and indeed there are many farcical elements – Frank’s duel with the working to rule Cullin, who ends up having his bike compacted into a comical square lump, some test-tube drunkenness, and Frank and Babs forever being discovered in a clinch by the other characters – but, just as the play’s title is an exclamation mark short of true farce, so the tone of the play itself never quite slips over into all-out door-slamming panic.

In fact, Frank is the only farcical character in the play, slipping in and out of reverie and periodically disconnecting with cast members’ (even his own) trains of thought, in a lovely performance by Daneman. With politics – governmental, economic, sexual, generational – all round him, he’s retreated into his work, the certainties of science (Frank to Cullin (‘Looking down my microscope, there are no politics. If I do a white blood cell count, you don’t get the red cells demanding a recount’) over the years, until this day, when Barbara’s eventual declarations of love prove more than he can handle.

In fact, all the characters prove more than he can handle, each turning out to be more complex than he (and, initially, we) expects. Barbara is no longer the faithful assistant. Cullin rises, albeit mometarily, above the ‘ignorant leftist’ stereotype. The vice-chancellor turns out to know more about Franks’ research than his classics-trained reputation suggests. And Frank makes a hideous job of trying to relate to Claire, the new assistant.

This isn’t merely an absent-minded boffin, but a tragic figure who has long ago abnegated his existence in the real world (he’s been long divorced, we learn) for the comfort of his research, and now finds himself with nothing, taken right back to the point he chose his profession, to grammar school (‘I’m still a child […] being eleven was the most serious thing that ever happened to me.’) The vice-chancellor suggests that a cold can be useful, leaving convalescents alone to ‘get to know the wallpaper pattern in the bedroom and feel sorry for themselves […] review their life, even frighten themselves a bit,’ and Frank cannot comprehend.

All this is set against a backdrop of nationwide cuts and shortages (the scientists subsist on celery and Rumanian Marmite sandwiches), with a mini-Winter of Discontent taking place in the lab via huge sacks of dropping from the experimental rabbits, which the militant porters refuse to move. But, again, it’s not a simple polemic about Thatcherite economics either. In fact, simplifying the world to avoid real thought and responsibility is probably the play’s main subject. A deceptively light and simple-looking story that, in best Play for Today tradition, runs into greater depths than the situation suggests.