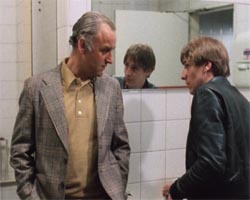 Small-time London boxing promoter Dinny Matthews (John Thaw) is disillusioned. He has seven fighters, “all tryers”, but none of them share his ambitions – “They get enough money for a down-payment on a bungalow out in Ongar and they’re satisfied.” He wants glory, not small-time club fights with an after-match dinner in a dingy neon canteen where you can’t tell whether the fish is plaice or haddock. One of his fighters, Glaswegian John Duncan (Billy McColl), is picked out to be a sub at The Wellington dinner club. Though by no means the best on Dinny’s books, he is the whitest, and it turns out the patrons don’t want to see the featherweight champion being beaten up by a “chocolate boy” (Dinny’s protest – “Elton’s not chocolate. He’s more coffee, like John Conteh.”)

The night before, Dinny’s colleague Cyril (Jonathan ‘Yes, Minister’ Lynn) remonstrates with wife Maureen Lipman about the true sporting nature of the club – she pooh-poohs his claim to be a ‘sportsman’, he redefines the term with reference to the networking aspect, and the backhanders (“I’m talking about business – stuff for the deep freeze!”) In the club bar, Dinny meets Neville (Ken Campbell) a gauche, rather superficial type who only seems interested in the presence of minor celebs (his mantra – “We had Alan Ball in the other night!”) and takes an interest in The Scotch Lad, but only for betting purposes.

In the dressing rooms, with yammering, anecdote-regurgitating trainer George, Dinny tends to John’s cut eye with a nail varnish-like substance and fills him in on the bout (“You’re on between the pudding and the coffee”). Then he nips up to a suite commandeered by bulk frozen food magnate Ray Little (Tony Caunter), wherein Cyril, Neville, Ray’s bank manager and two hookers hang languidly about. Dinny, faintly repulsed by all this grim small-time decadence, nevertheless stays to get a promise of a two grand sponsorship deal from Little. Then comes the fight.

As the diners all about eat pudding, shout, chat, and fall asleep, John makes good initial progress against the East Acton champion, but a crafty headbutt in the second round reopens the eye gash, and the ref stops the fight in the sixth, the champ’s reign intact. Little withdraws the sponsorship offer, leading Dinny to pin him angrily against the suite’s bar. Outside the club, all the positivity of training has evaporated, and he levels with the still-ambitious John (“There’s five hundred pro-fighters in the country – there’s more certified lunatics […] You’re champion of nothing. You’ll get work […] you won’t make any dough […] that’s the trouble with this game – full of bloody romantics.”)After this singular speech of cruel kindness, they part ways for good.

A straightforward story of misplaced hope, this, combined with fantastically seedy visuals from director Brian Gibson. The wafer-thin glamour of the club and its ‘sportsmen’ is constantly peeled back to reveal the underlying shabbiness. It’s a short walk from the chrome and glass of the bar to the concrete and steel of the club’s bowels. Frilled shirts are pulled aside to reveal sweaty fat stomachs. And the well-boozed, silver service diners are, of course, only yards away from two working class lads knocking each other’s brains out – the entire sport in microcosm.

This play is also interesting as a pointer to the future – writer Leon Griffiths’ small but perfectly-formed output of original TV scripts, starting in the mid-’60s with Wednesday Play The Voices in the Park, and sitcom A Slight Case Of…, which starred Roy Kinnear as a shifty, silver-tongued businessman, would culminate in 1979 with the creation of Minder, a genre series that broke down boundaries between outright comedy and ‘straight’ drama. …Sporting Club sees many of Minder‘s trademarks forming, in less overtly comic form – the cross-purposes banter, the depiction of seediness without either pouring on the moral judgement or shying away from the reality for comic effect, and most importantly the sense of constant disappointment in life, brilliantly exemplified by Thaw in his final talk with McColl outside The Wellington.

There’s no bitterness here, as you might expect from Play for Today‘s popular stereotype, no semi-articulate railing against fate or society, just the sort of reaction real people would produce. They don’t go and get drunk and smash up the place, or beat the wife up, then collapse into a sobbing heap in the corner. They walk home. Quietly, not exactly stoically, but attempting to gather all the dignity they can still muster on the way. A superficial look at this play might conclude there’s not much drama going on here. What there aren’t are histrionics. In the unspoken, the unconfessed, the undone, there’s drama here in spades.