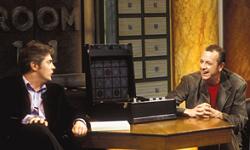 SUPERIOR sound-only reading of Nick Hancock’s Orwell-hued comedic discussion of all things disliked, with better and funnier guests (worth listing in full: Paul Merton, Jenny Eclair, Danny Baker, Arthur Smith, Steve Punt, Annie Nightingale, Ian Hislop, Jo Brand, Tony Slattery, John Walters, Helen Lederer, David Baddiel, Stephen Frost, Donna McPhail, Frank Skinner, Trevor And Simon, Caroline Quentin, Tony Hawks, Rory McGrath, Kevin Day, Maria McErlane, Mark Lamarr, Nick Revell, Simon Delaney, Chris England, Andy Hamilton, and Hancock himself with Danny Baker in the presenter’s chair) telling their tales of loathing for their most hated people, places and pop songs in the hope that their reasoning would be sufficient to warrant a place in the titular “bin lorry for the bad, boring and Beadle”. Schoolroom misdemeanours and humilating early steps on the career ladder were frequent starting points for the misery-fuelled anecdotes, but there was also a hefty slant towards seventies pop cultural ephemera, hence incredulous rumination on the likes of I Will Survive, Boomph With Becker, Butterflies, Kung Fu Fighting, and track two off Jigsaw’s LP,  as well as more esoteric tales of “this train has failed”, O! Punchinello and Sarah Baddiel’s obsession with ‘Golfiana’. TV transfer started out well, but then they started getting ‘name’ guests who didn’t have anything to say for themselves, and then Paul Merton took over and it just turned into the Blue Peter Elephant again and again and again every single week… so in it goes!