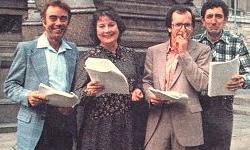 SURREALIST Renwick’n’Marshall free-for-all ostensibly based on the correspondence course in ‘dynamic living’ of Dr Emil Burkiss (HA-LLELUJAH!) and its unsavoury success story Eric Pode Of Croydon (“isn’t he a panic!”) but zigzagging in every concieveable stream-of-consciousness direction to ridicule just about every subject under the sun, though reserving most of its bile for Radio 4 standbys like Week Ending, The UK Theme and ‘Mr Different Adams’ (“I see comedy as a kind of…”). New heights of situationist silliness scaled with wilful form-destruction including a sentence split across two shows, a sketch about an amoeba employed by the Department of Civil Service Staff Recruitment and Fisheries as a token Desmond Dekker And The Aces, and an edition being dropped on the floor and smashed and glued back together in the wrong order. Script-speaking courtesy of Jo Kendall, Chris Emmett, Nigel Rees and – to the bemusement of many a Radio Times-scouring younger listener – Fred Harris.