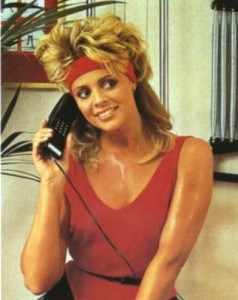 As the millitantly brown ’70s slowly turned into the ill-advised free market lime green of the ’80s (and it was very much a faltering, whoops-back-again-forgot-my-hat kind of handover that took far longer than most period-recalling punters allow) those clunky GPO telephones with the big old dumbell handsets and dials began to look distinctly out of date.

Gradually, at first in an all-new, glossy opening section of your local phone book and then on TV, BT began advertising a bewildering range of stylish, hi-tech replacements for your trusty 700 series. For the businessman, there were the sturdy Statesman and the elegant Ambassador. For the wacky, you had the inevitable ’20s-style candlestick and Mickey Mouse novelty models, as well as the bright orange ‘Ericofon’ which, being the dead spit of the phones in The Prisoner, looked decidedly out of place in this context.

But more than any of these, the opening up of the phone market led to a slew of sleek-‘n’-sexy designs that took up the futuristic baton from where the ’60s classic Trimphone left off. You had the swanky React, the minimalist Versatel, the chunky Astrofon and, head and shoulders above the rest, the Slimtel InPhone. Those two words alone, surely, mark the historical spot where the trusty, utilitarian telephone got those first awakenings of fashionability and gadgetdom which continue to blight All Bar One conversations to this day.

The InPhone boasted a ground-breaking all-in one handset with no base unit (but still a big hefty wire going into the wall of course, this ain’t Dan Dare or nothing), a self-adhesive ‘colour-matched wall hoister’ and, best of all, a cracking good tune in the ads. Admittedly, said tune was Dobie Gray’s ‘The “In” Crowd’, reworded with some phonewise banter (‘I go where the InPhone goes’ – which, due to that wire, meant an unimpressive maximum distance of eight yards from the nearest socket), but coming from the mouths of lycra-clad aerobicists and red-braced city types, it heralded a bright new age of the phone as no-holds barred style statement. Er, thanks for that.