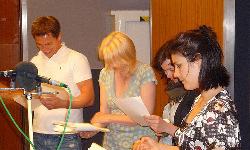 ETERNAL childhood car journey boredom-accelerating forty-five minutes of over-enunciated words penned by ‘first time writers’, only occasionally enlivened by injection of sub-Yes, Minister dry wit or splurge of lunacy about estate agents who yearned to have a hat with helicopter blades attached or whatever.