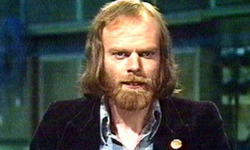 SEDATELY BEARDED and unchallenged king of American FM-style “and to take us up to the 3am news, here’s a couple of classic album tracks from Bob Seger” type jocks, originally one of the early seventies hippy intake (fronting, as luck would have it, Sounds Of The Seventies) and the face of Whistle Test, was among that wave of presenters who washed up back at the station in the late eighties, taking you through the night with some vintage Van Morrison, but before that, here’s the new one from Sting…