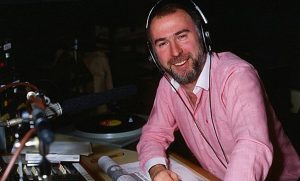 FOOTBALL TRANSFER-esque signing from BBC Radio Scotland, enticed Londonwards in the mid-seventies with the promise of a headlining slot; didn’t go quite according to plan, due to schedule reshuffling and Woganic tussling over the Eurovision ‘gig’, but still won over legions of daytime listeners (not to mention stoking the boiler for those Radio 2 Summer ‘Railshows’, bringing consumer advice and Jim Reeves records to the elderly and infirm) and after years on the ‘bench’ got his big break when Wogan temporarily ditched Radio 2 in favour of evening TV chat shenanigans. Celtic twang proved an unpopular substitute for Irish blarney, so mid-mornings beckoned, where he remains to this day, with annoyingly ‘popular’ Gambaccini-tastic quiz Popmaster in tow.