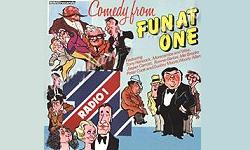 BURNETT-INSTIGATED lunchtime lafforama, involving little more than a short jingle and a track from the Secret Policeman’s Ball LP. Office worker entertainment on a budget!