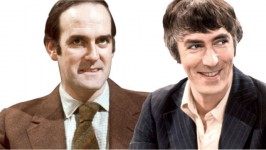 WITH Alternative Comedy looming on the horizon like a manic snorting lisping bloke saying “Barstard!”, a meeting of minds took place between the primary practitioners of pre-Python, post-Python and, erm Python-Python Oxbridge fringe-fripperies in the form of this decidedly off-kilter panto. Douglas Adams and John Lloyd produced, Clive Anderson and Rory McGrath scripted, and Tim Brooke-Taylor, Bill Oddie, Graeme Garden, Peter Cook, John Cleese, David Hatch, Maggie Henderson and Jo Kendall mugged to the audience (well, apart from the home-tape-recorded Cleese) as if in a freewheeling edition of ISIRTA on the run from the ‘structure’ police, while occasionally referring to pseudo-satirical pisstaking of Aladdin-skewed cliches. Utter genius madness from start to finish, and basically an entire Christmas Day of BBC7 in one handy hour-long package.