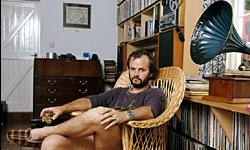 FORMIDABLE alterno-colossus and one-time tramp-resembling bloke scowling at the back of that infamous original group photo on the steps of All Soul’s Church by Broadcasting House. Got there via California, Dallas and the heady days of the pirate stations, but John Robert Parker Ravenscroft (as we’re duty bound to refer to him), despite often embodying the exact opposite of many of the station’s favourite fly-by-nights, remained a solid fixture right up to the end, mostly by dint of being any good. From the days of the wonderfully of-its-time Perfumed Garden and Top Gear, through prog, punk, ‘new wave’ (Gang Of Four and Wire, generally), ‘indie’ (anything on Beggars Banquet and Factory, generally), and onwards, The Peel championed and promoted the best (and, to be fair, a good measure of the worst – Carcass, anyone?) music of the last three-plus decades, without ever appearing a bandwagon-jumper. Show always introed with the increasingly inappropriate blues plodding of Grinderswitch, while Peel developed an unmistakeable aural persona – playing records at the wrong speed (even after about 40 years in which to get it right); never talking over a fade-out if he could help it (often resulting in a battle of wits with some avant-garde stop-start-ending disc); continually praising The Fall above most everything else except Liverpool FC; continually bemoaning the state (i.e. lack of Fall songs) of the reader-voted and self-compiled Festive 50 chart; odd, whimsical shaggy dog anecdotes about his kids meeting the bloke out of Napalm Death on a ferry, or buying underpants; odd, silly anecdotes about long-time producer John “What’s On!” Walters etc etc. It all sounds frighteningly misconstrued, but it worked, generally due to Peel’s unforced and self-effacing on-air style, unlike his one-time sworn enemy The Bates (fact – the only two people in the world who hate John Peel are Bates and the singer off The Pooh Sticks. Enough said). Died suddenly in 2004, shortly after finishing his last show with Klute’s No-one Is Listening Any More (from the album Time For Change), and an entire way of life went with him.

Happier note to finish on – In 1993 Peel took over the lunchtime slot for a week after then-controller Johnny Beerling was challenged by someone at a conference. He’d obviously been told “Look man, we don’t want to compromise your show, but remember there will be a different audience listening, and we do have a daytime playlist to follow… just bear that in mind, OK?”. First record – Why Are People Grudgeful? by The Fall, followed with the obscure reggae original version of the same song. He then continued in the same vein, playing a lot of hard-trance, the odd Beefheart classic and making snide comments about most of the playlist. For instance, the John Secada song which included the line “…there’s nothing you can do to stop me” to which Peel retorted, “Yes I can, mate, I can take your awful CD out of the machine and throw it as far away from this studio as possible”. For a brief moment, we thought we’d won. Next week, he was back on the night-shift. Bet off.