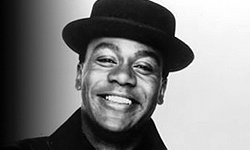 BROUGHT IN to temporarily replace a Late Late Breakfast Show-occupied Noel Emonds, Lenworth was only too happy to be part of the ‘team’ and stuck around for a good few years’ worth of weekend morning japesmithery, including the first ever appearances of Delbert Wilkins, the last ever appearances of Algernon Razzmatazz, and Everett-inspired serial Gronk Zillman – Private Eye of the 21st Century, a bizarre freeform yarn featuring Leonid Eagleburger (that’s enough!), the most evil man in the world, in between a load of ultra-hip rap and electro tracks and guest appearances by pals like Ade Edmondson, Dawn French and ‘neil’.