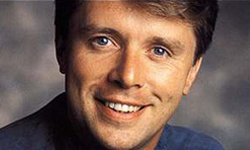 SELF-APPOINTED late-night one-man intellectual outpost with clever-clogs quizzes, serious guest roster (Edward Heath, Paddy Ashdown, Frank Zappa, pre-stardom REM etc), about six Van Morrison tracks every night (this may well have been the ‘musical plan’ that his jingles promised), ‘guessing’ phone-in callers’ star signs, doing funny pretend Doug E Fresh-era raps over the few dance tracks that made it under the wire onto his show (“Have you noticed all these dance records all sound the same? Here’s Deacon Blue”), irrational dislike for The Mary Whitehouse Experience and Blur, insistence on billing himself as Nicholas Andrew Argyle Campbell, and the mighty combination of sub-Week Ending satire and rock snob boredom incarnate that was The Teasingly Topical Triple Tracker. Also the architect of a legendary April Fool’s Day stunt in which it was announced that Simon Bates had been made Minister For Pop, rewarded for his efforts with a bottle of Moet from station controller Johnny Beerling.