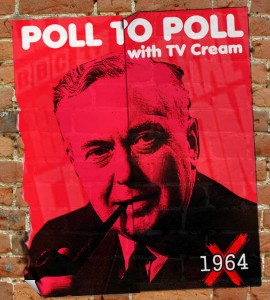 Welcome to the first of TV Cream’s election podcasts.

Each week between now and polling day we’ll be hastening through telly hustings of the recent past.

We’re beginning in 1964 with Harold Wilson’s attempt to turf Sir Alec Douglas-Homeowner out of Downing Street using a pipe, some HP Sauce and the white heat of technology.

But besides looking back at what went on in BBC Television Centre on that nerve-jangling night of 15th October (and much of the 16th), the podcast also lifts its eyes from a list of the latest gains and losses to:

– hear from Dr David Butler, who talks exclusively to TV Cream about his decades of TV electioneering;

– draw up our first list of TV Election Essentials, this week focusing on the role of the presenter;

Along the way there’s clippage from the likes of Alan Whicker, Raymond Baxter, Ken Dodd, David Frost, Tony Benn, Milicent Martin, Roy Kinnear, Cliff Michelmore, The Beatles and a man getting very cross with a crowd of people in Smethwick.

But enough of that. How can you hear the podcast? Let us count the ways. There are three:

You can download it from TV Cream (a landslide-sized 81MB); you can subscribe to it via iTunes; or you can listen to it right here: