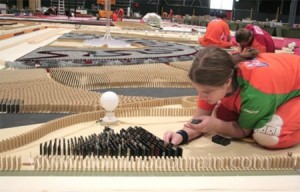 What do you get if you combine an ancient pub game, the law of gravity, a big old Japanese warehouse, blatant corporate sponsorship and Norris McWhirter? The most absurd craze of the absurd craze-saturated early 1980s, that’s what! The basic premise: bored US college kids amuse themselves by setting up long lines of dominoes on their ends, flicking one to start a collapsing chain reaction, then phoning up a large corporation to get some money to buy half a million more dominoes. And so the thing escalated, incorporating criss-crossing paths, dominoes going up and down little perspex ramps, dominoes falling into little electric cars, little rockets that were ‘launched’ by falling dominoes, a domino going over a mini Niagara Falls in a barrel, the inevitable Mona Lisa depicted in different coloured dominoes, and half the dominoes being set off by accident by earthquakes, interloping wildlife, or an over-eager press photographer dropping his lens bag over the crowd barrier. What this all added to the sum total of human existence is anyone’s guess, but a gold star for dedication, definitely.