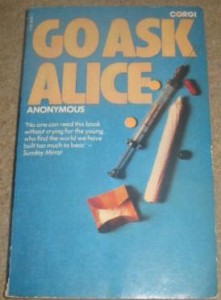 Anonymously penned Jefferson Airplane-referencing perma-controversial purported diary of a sixties teenager, pretty much your average football-team-captain-lusting-after girl next door until she was slipped some crazy acid courtesy of a spiked drink, causing her to ‘see’ the evil radioactive waves in jello pudding and consequently slide into depression, schizophrenia and ultimately overdose-assisted suicide. Presumably originally intended as a cautionary tale, its lurid ‘square’s eye view’ of lysergic imagery made it into an illicit cult favourite with adolescents in search of risk-free literary kicks, and can still be found in large quantities in university halls of residence to this day. Also inspired a TV Movie adaptation starring – haw – William Shatner.

Related Items:'acid', 'Anonymous', bad trips, Drugs, far-out hallucinations, Go Ask Alice, Jefferson Airplane, one pill making you larger, one pill making you small, something about a table seen from every angle at once, those yellow and green blobs that are meant to represent 'psychedelic'
Share
Tweet
Share
Share
Email