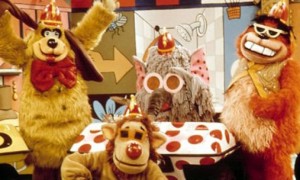 RETINA-INFURIATING Hanna-Barbera live-action mayhem of hazily-yet-vividly-recollected infamy. The objective, as far as anyone can actually make out an objective behind all this, seems to have been to create a cross-platform moneyspinning Nuggets-friendly garage punk band that would appeal as much to sugar-crazed youngsters as to crazy far-out hippies who had ‘seen’ the hidden messages in Walt Disney’s Fantasia, by plonking them in an acid trip-esque shifting kaleidoscopic vista of Saturday morning TV entertainment wherein psychedelic back-projections and Doors-y keyboard runs vied for space with slapstick comedy and lower-rung animation, thereby simultaneously conquering the TV ratings and pop charts, and shifting a couple of boxes of official tie-in breakfast snack Kellog’s Raisin Bran into the bargain. This they hoped to achieve via the cunning innovation of getting the band to dress up in huge cartoony animal costumes.

That line-up in full, then: lisping lolling-tongued cartoon hound Fleagle (guitar), dopey clown-nosed lion-ish Drooper (bass), Mickey Dolenz-resembling vaguely sort of ape-like Bingo (drums), and alarmingly unkempt shaggy creation Snorky (keyboards), whom under a certain light and if the wind was blowing in the right direction could be loosely said to have borne a very slight passing resemblance to something akin to an elephant. Their live action antics were, it has to be said, ever so slightly on the formulaic side – they arrive in psychedelically-decorated clubhouse via chute/bendy fireman’s pole/’Banana Buggy’, Fleagle initiates Banana Splits Club AGM by banging a tremor-occasioning gavel, Drooper attempts to take out ‘trash’ but is defeated by psychotic garbage can, Fleagle attempts to collect mail but is defeated by psychotic mailbox, Snorky gets squashed behind door and momentarily becomes 2D carboard cutout of self, all four withstand sabotage ploys by go-go dancing schoolgirl rivals The Sour Grapes Bunch, audience gets bored by intruding Mariachi irritants The Dilly Sisters, Drooper attempts to play agony aunt and leaves the others head-in-hand via dimwitted corny gag response, assembled company yell “HOLLLLLD THE BUS!” while fleeing recycled Hanna Barbera offcuts, sub-Shadows Of Knight pop-psych numbers play out to footage of the gang larking about in theme parks, talking Moose Head and Cuckoo Clock offer running commentary on whether or not said activities consitute a ‘triple ooch’, and so not particularly varying forth. However, it succeeded by virtue of being rendered in brain-searing cartoon-come-to-life Incense & Peppermints-evoking one-pill-makes-you-larger gaudiness, and by appearing in bitesize portions due to presence of substantial non-Splits interludes.

Widely presumed to be otherwise unsaleable Hanna Barbera misfires that had been sitting around on a shelf for a couple of years, these are all (well, nearly all) now ironically as well-remembered as the Splits themselves. The Arabian Knights brought together the world’s most unlikely collection of freedom fighters – deposed gymnastic type Prince Turhan, equally deposed master of disguise Princess Nida, strongman Raseem, magician Fariek, Bez who apparently had ‘the gift of the beast’ (ie he could transform into, say, an elephant simply by exclaiming “siiiiiiiize of an elephant”), and Zazuum – the hee-hawing happy-go-lucky donkey who with a simple tug on his tail by a hard-of-thinking enemy guard scoffing at the ‘simple beast’ would transform into a whirling wall-demolishing equine whirlwind – to jape-equippedly battle the corrupt Bakaar and ginger-bearded henchman Vangore in Old Baghdad. Slightly more historically accurately – and slightly less entertainingly – The Three Musketeers saw Porthos, Athos and Aramis of literary legend (plus their title-taxing regular cohorts, the expected D’Artagnan and Godzooky-style non-canonical creation Tulee, a precocious brat of indeterminate royal patronage who invariably got told to stay at home with his wooden sword-waving gung-ho derring-do but ended up disobeying everyone and saving the day) foil endless plots to purloin crown jewels and the like, armed only with rapier-like awful puns about the fiends and blaggards they had just knocked over with a barrel (well, that and rapier-like, um, rapiers). 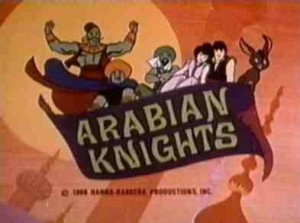 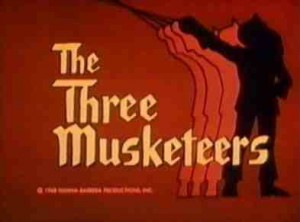 Less often seen, and deservedly so, was Micro Ventures, sci-fact ‘edutainment’ that forgot the ‘tainment’ bit about some family who can miniaturise themselves and their car to enable close-up observation of, and the endless reeling off of unprompted scientific facts about, ‘soldier ants’. And then, in an exciting excursion into rule-proving-exception for the nominally pen’n’ink based Barbera & Co, there was Danger Island. Lavishly directed on location by a then-unknown Richard Donner, this episodic cliffhanging saga charted the attempts of Prof Hayden (Frank Aletter) and inappropriately dressed daughter Leslie (Ronne Troup) to locate his missing explorer brother on a strange uncharted island with mystical powers, helped by their clean-cut diver Link (Jan-Michael Vincent) and stranded seamen Morgan and Chongo (of “uh-oh Chongo!” catchphrase-generation), and hindered by raggedy pirate captain Mu-tan and blue body paint-favouring natives The Skeleton Men.

Memorable fare indeed, for all the right and indeed wrong reasons, but it never quite got Raisin Bran flying off the shelves and the ‘suits’ got nervous. Series two brought with it some desperate streamline-attempting innovations – zany falling-over-on-bumpy-slide title sequence antics to replace the original shots of them miming to the theme song and ‘meeting’ the public; Porthos and company deservedly binned in favour of long-forgotten Hanna-Barbera-on-autopilot creations The Hillbilly Bears; wisecracking puppet gopher with standard-issue wonky teeth; The Splits delivering corny one-liners through a hatch-equipped ‘Joke Wall’; and most conspicuously, the original Snorky outfit replaced by a more urbane and recognisably elephant-esque model – but to no avail. The four oversized cartoony animals barely made it into the seventies – a decade in which the pop charts would look more favourably on human musicians wrapped in luridly-dyed carpet – and barring a best-forgotten attempt at an animated revival, it was all over for Bingo and the boys.

Or at least in America. Over in BBC-land, however, what had failed as a cereal’n’records-flogging gravy train was to prove to have an altogether different kind of cultural staying power. For the Beeb had seemingly paid for about twenty thousand repeat showings as part of their original purchase, and those self-same battered prints – seemingly increasingly washed-out and chopped-down with each successive outing, though always with that original title sequence intact – would occupy the First Thing slot on many an eye-hurting Saturday morning well into the eighties.

Related Items:...and we haven't even started on The Skatebirds yet!, "hey Drooper - take out the trash!", "that's a triple ooch!", 1970, A Hanna-Barbera family of archetypes, Bingo, Danger Island, Drooper, Fleagle, Furry freaks, Micro Ventures, one pill making you larger, one pill making you small, People dressed as oversized animals, Psychedelic in-camera jiggery, Snorky, The Arabian Knights, the sound of HR Pufnstuf not losing any sleep, the sound of The 13th Floor Elevators not losing any sleep, The Three Musketeers, those yellow and green blobs that are meant to represent 'psychedelic', Unloved two-for-the-price-of-one effrontery, yes that Richard Donner
Share
Tweet
Share
Share
Email