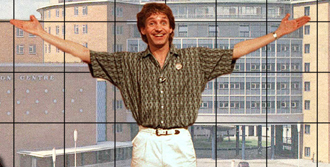 We’ve lined up a Boyd-sized slice of summer entertainment to run on the site over the next few weeks.

Welcome to TV Cream’s Puzzle Trail: a doff of the hat to Clive Doig’s school holiday staple of the early 80s, but also a salute to the greatest building in the world, which turned 50 last month: BBC Television Centre.

Yup, something of immense importance has gone missing within its hallowed walls.

And it’s up to you to find it.

Here’s how the Puzzle Trail works.

Below you’ll see a grid superimposed on Television Centre. The missing object is in one of its 32 squares.

Each day for the next few weeks, a clue will be posted here on the TVC website revealing details of a square in which the object is not to be found.

This information might be in the form of a riddle, an allusion, or simply (like today) as a bit of gossip.

As the Puzzle Trail unfolds and you solve the clues, you’ll be able to cross off one of the squares each day, until there are just two remaining.

At this point the final clue will be posted on the site. The first person to email the correct location of the missing object will win a TV Cream goody bag containing – at the very least – a copy of every single TVC tie-in book (such as this and this… and even this!).

Details of where to email your answer won’t be given until the day of the final clue.

Along the way, clues will also be given as to the nature of the missing object. There’ll be an additional prize for the first person to correctly guess what the object is.

Anyway, that should all be pretty straightforward. All the clues will stay up here on the site, so if you miss one you’ll be able to check back and find it.

So why not print out your TV Cream Puzzle Trail map (jpg and pdf downloads below) and cross off your first square, because here comes…

And it’s the form of a piece of correspondence from host of 1983’s Puzzle Trail adventure The Puzzleton Plans, Howard Stableford:

“Hello Puzzlers. Thought I’d help you get started by dropping you a quick line to say there’s no point looking up on the metal fire escape. I tried to hide up there once from an enraged Bruno Brookes, when he discovered Beat The Teacher had been axed. He thought I’d been dropping words of poison in the ear of the DG. I thought the fire escape was a good place to lie low. Bloody hell, you better believe me when I say that’s the last place to try and keep anything hidden. When I got there I found Paul Jones, Simon Bates and Guy Michelmore already there, having an almighty bitching session! Anyway, good luck with the puzzling!” 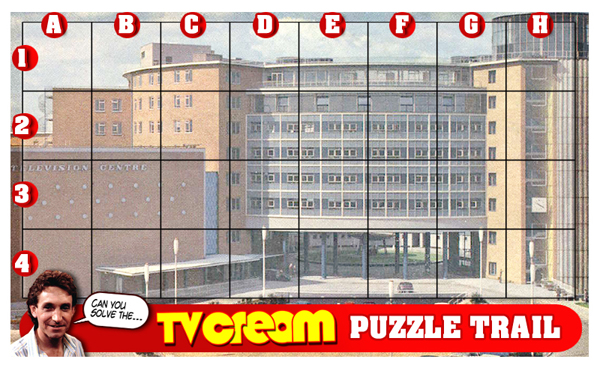