TVC’s rumour grill is back.

Yes, this is where the latest morsels of gossip and speculation about the next series of Dr Who are subject to a spot of heat convection and/or electric filaments in an effort to provide a tasty post-prandial or pre-supper fork treat. And then we check to see whether the latest Who rumours are true or a load of shite.

1) The first words of Dr Who Matt Smith in his first proper episode as Dr Who are: “This never happened to the other fellow”.

TV CREAM DR WHO CONSUMER UNIT SAYS: These were to have been the first words Matt Smith uttered in his debut episode, until the production team discovered a clause in Russell T Davies’s contract that gave him the right to pen the inaugural dialogue that was to launch the show in a bright, bold new direction. As such Matt Smith’s first line is to be: “No! Not the mind probe!”

2) A competition is being held for viewers of Blue Peter to come up with a sentence to be used by the BBC1 continuity announcer to introduce the first episode of the next series.

TV CREAM DR WHO CONSUMER UNIT SAYS: A competition is being held, but it is for listeners of Terry Wogan’s new radio show, Terry Wogan’s Sunday Brunch, and will be launched live on Radio 2 on 21st February when Matt Smith “materialises” unexpectedly during some crosstalk about Children in Need and venison.

3) The episode of the next series of Dr Who that falls in the week of the general election will feature a special insert showing the Doctor stepping out of a polling booth and whispering to his companion, “I voted for the one with two hearts”.

TV CREAM DR WHO CONSUMER UNIT SAYS: Not true. There is nobody standing in the general election with two hearts. Nor one, for that matter (SATIRE).

4) The next series of Dr Who will feature a sequence involving Gerald Flood popping into an Indian restaurant for a meal with the Doctor, only to confess “I can never decide what to have – I’m a bit of a korma Kamelion”.

TV CREAM DR WHO CONSUMER UNIT SAYS: Again, not true. The Doctor will go into an Indian restaurant with Julia Sawalha, only for the latter to confess: “I should never have come, but you press ganged me into it”.

5) In the final episode of the next series, an effigy of Russell T Davies can clearly be seen in the back of one shot, being pissed on by a drunken Scotsman.

TV CREAM DR WHO CONSUMER UNIT: This is a rumour being put about by a barrowman* of former Dr Who Magazine writers. In the final episode of the next series, Matt Smith regenerates into Meera Syal.

*The collective noun for a group of sci-fi magazine employees 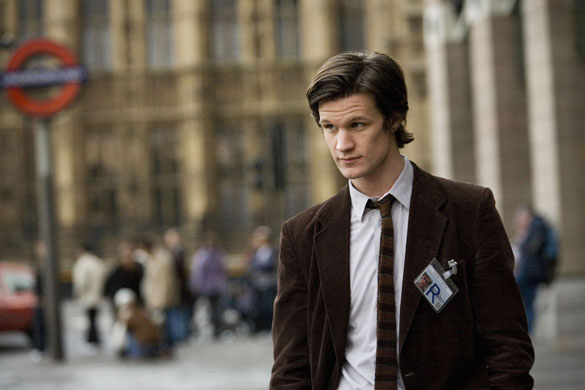