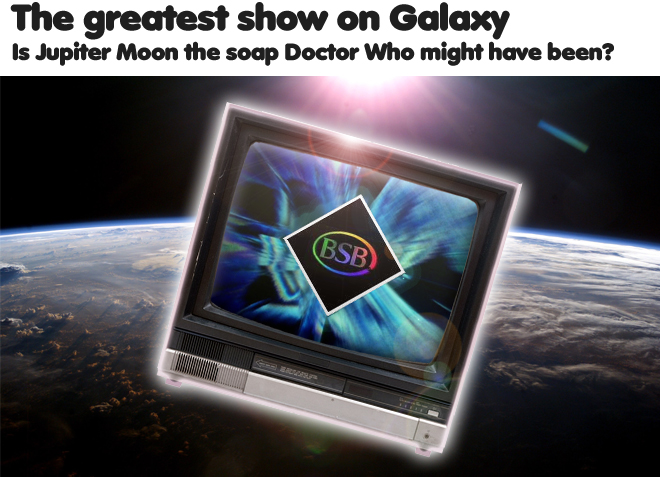 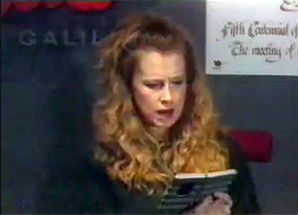 Starring that girl, y'know, who was also in Crossroads

Doctor Who might be the greatest soap in the galaxy, but to date, there has only been one attempt at producing a thrice-weekly, 52-weeks-a-year sci-fi soap on British television.

It was called Jupiter Moon, and it was the flagship drama of BSB, the satellite broadcaster that, 20 years ago, took on the might of Rupert Murdoch’s Sky, beaming five new channels of films, entertainment, sport, music and documentaries to Earth via the miracle of the squarial.

For a generation of Doctor Who fans, this mini-Pharos Project now holds a strange, nostalgic allure. If you had a squarial screwed to the side of your house, it meant access to the first ever re-run of every remaining DW story, in order, from start to finish, one episode a week (an endeavour that, if BSB had survived, would have taken until around 2001 to complete).

Not to mention the Doctor Who Weekend of September 1990, with the exciting prospect of Children’s BBC alumnus Debbie “Helloooo!” Flint and JNT linking Daleks’ Invasion Earth: 2150AD and interviewing Terrance Dicks (BSB was so big on the Time Lord, it even named its satellite after a classic Doctor Who story, Marco Polo. Or at least, we like to think that’s the reason.)

But BSB felt its entertainment channel, Galaxy, needed a soap opera if it was to compete with the BBC and ITV, and commissioned former Crossroads producer William Smethurst to create one. What he came up with, however, proved light years (literally) away from Walford and Weatherfield. 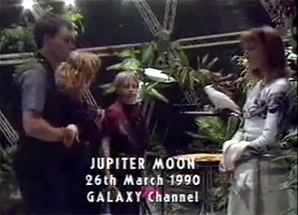 A Did You See?-style pasting is cued up...

Smethurst’s elevator pitch was: “The loves, passions and courage of the students and crew of a space polytechnic as it ventures through the universe in search of scientific discoveries.” Set 60 years in the future, Jupiter Moon was to follow the adventures of the Ilea (a clandestine tribute to the recently abolished Inner London Education Authority), in orbit above the moon of Callisto.

“There’s no little green monsters at all,” a slightly defensive Smethurst reassured a dubious audience. “We’ve taken a group of people – young people as they are today, with their domestic troubles, love affairs and so on – and put them in a hostile and challenging environment.”

The notion of a celestial soap seemed to chime with the brave new world of television from space. Smethurst’s relentless pursuit of realism extended to commissioning British Aerospace to calculate an orrery for the positions of the Jovian moons in 2050, and hiring a choreographer to predict the dance fashions of 2050AD (“Probably a little more outrageous, but not that different”).

Maintaining BSB’s enthusiasm for all things Doctor Who, the cast featured Terry Molloy, the 1980s incarnation of Davros, as “old space lag” Pegleg Johnson, alongside the likes of Lucy Benjamin (later to become Lisa Fowler in EastEnders) and Anna Chancellor. The crew of the Ilea also included a character called Philippe Gervais, named after Ricky Gervais (no, really), whose partner Jane Fallon worked as associate producer on the series.

The script team, meanwhile, included Ben Aaronovitch, fresh from writing Remembrance of the Daleks and Battlefield, who contributed one of Jupiter Moon‘s biggest storylines, “the murder trap embedded in the Achilles files of the Michelangelo Expedition” (it says here).

And Aaronovitch’s involvement raises an interesting hypothetical question: if Doctor Who had been reborn as a soap opera in the 1990s, might it have looked something like Jupiter Moon?

If it had been given the same budget, then the answer could very well have been: yes. Unfortunately. For the truth is, Jupiter Moon really wasn’t very good. 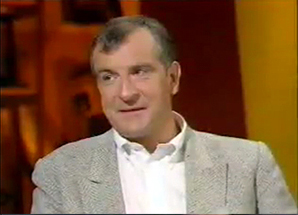 “I’m afraid the thing is absolutely awful. It’s unbelievably bad. I sat there cringing in horror at what was going on,” lamented Douglas Adams on BBC2’s Did You See…? in April 1990.

“You have absurd things to remind you where you are – in case you haven’t been tipped off by these appalling sets that look as if they’d have been rejected by Doctor Who,” noted the former Who script editor in a fit of mild disloyalty, “where somebody says, ‘I promise I’ll be very careful… I promise I’ll be the most careful man in the universe!’”

It’s tempting to suggest that Jupiter Moon’s fatal flaw was that sci fi fans don’t like soap, and soap fans don’t like sci fi, but Russell T Davies, Gareth Roberts and the rest have blown that theory out of the water.

Perhaps it’s more accurate to say that if you like sci fi, you don’t really want it to be soap. It’s tough enough to pull off the everyday adventures of space folk, even when you have a lead character as compelling as the Doctor. Nobody really wanted to see Nyssa, Tegan and Adric bickering inside the TARDIS, for instance, when they could be outside having adventures.

Jupiter Moon, however, suffered from a distinct shortage of compelling characters, and despite enticing Who-style titles like The Fire Of Io, the average episode substituted a lot of Blake’s 7-esque looking at screens and shaky bridge-under-attack camerawork in lieu of genuine adventure.

And setting the story 60 years in the future meant it was near impossible to identify with the everyday elements of the programme, not least thanks to scripts dressed up in lots of “meet me at 13:30 in the Dome” space chat.

Failing both as sci-fi and soap, Jupiter Moon reached the end of its mission in December 1990, when the Starship BSB was finally shot down by the rebel space pirates of the Sky empire. Now hang on, that sounds like a really good idea for a sci fi soap…