They’ve heard there’s to be a rather special announcement from the Palace during the next few weeks, and they’re taking no chances.

That’s right: the pair have already taken up position on the Mall and are busy toasting the happy couple with a warming brew from their Union Jack flask. Well done Peg and Kathleen!

As they continue their stout vigil between now and Christmas, we’ll be dipping into our ottoman of listings-related paperwork to see how TV and radio covered Royal Weddings of the past.

These were shamelessly lavish spectacles indeed, with a famous TV face posted every fifty yards along the procession route, battles over which side got to go in the Goodyear blimp, and Radio Times souvenir editions with illustrated maps, family trees and hymn sheets.

First up, back to the heady, strike-bound chill of November 1973 and the nuptials of Princess Anne and Mark Phillips.

Disappointingly low key, as if neither the Beeb nor ITV had worked out how to do this sort of thing yet. It’s left to THE FROST SHOW to set the mood, with Dave chairing a lazy discussion on whether it’s all a big fuss about nothing and Angus Maude MP repeatedly telling him he’s wrong.

Most certainly. Setting a trend, the couple-to-be grant a minutely choreographed joint audience to Andrew Gardner (ITN) and Alastair Burnet (BBC) which goes out two days before the ceremony on both channels at the same time, and with the pair of hosts painstakingly divvying up the questions. “Are you looking forward to the day?” requests Andrew of Anne. “And are you looking forward to the day?” continues Alastair to Mark. “It was a mercy when an embarrassing point was abandoned so that a fatuous one might be taken up,” says Clive James.

Both channels kick off at 8am, the earliest either have ventured into breakfast time since the previous year’s Olympics. Given the fact the country was shortly to discover it had only two weeks of coal left, however, both bugger off around lunchtime.

There isn’t any. It’s the first TV royal wedding, dammit! 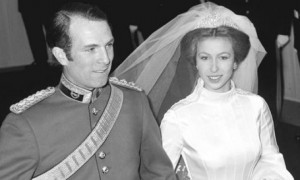 Fair. Val specialises in the speculation, spending the first hour promising a glimpse of what the dress might look like, the passing the next two hours promising a glimpse of what the dress will actually look like. Far more effusive is the debate on what to expect by way of headgear, Janey Ironside being roped in to deliver a commentary on the pedigree of hats on display both in and outside Westminster Abbey.

Some Miss World contestants, including Miss Australia (“I think, erm, it must be a nerve-racking experience for both of them”) and Miss Belgium (“I oper we will be seeing it on Belgian television”); author of 500 books Ursula Bloom; and a Japanese tourist (“Wedding! Japan!”)

There’s fulsome foal-talk from start to finish, thanks to the happy couple having first spied each other across a crowded paddock. Alison Oliver, Anne’s trainer, testifies to the atmosphere before a big event being “quite tense”. Michele Brown interrogates a young girl as to whether Anne has too many privileges. “Yes.” “What privileges?” “Horses.” When the Household Cavalry hoves into view, grandmaster of the lip mike Tom Fleming intones: “For a bride and groom who have an interest in horses, this must be a thrilling sight.” Later, when the bridal coach pulls up back at Buckingham Palace, Tom supernaturally observes: “I’m sure those horses know that they’re home.”

is, aside from the population of Australia and, we oper, Belgium, nobody. There are no live link-ups with British colonies the other side of the globe, because it’s too expensive.

Cliff Michelmore talks to some bell-ringers in Mark’s village, Great Somerford, who think the 5,000 peals planned for the Abbey is piss-easy. They aim to double it. “You’re gonna doublet?” roars Cliff jovially, “I doan believe ya!”

A female spectator has been to 10,000 weddings. A girl thinks Anne is three feet tall.

The Beeb show a montage of official wedding photos to the strains of When I’m 64. An astrologer proclaims that Mark’s perceived public image of dullness is wrong because “Leo and Virgo have complementary strengths.” Pete Murray tries to get record requests from the waiting throng.

7/10. A shot of Buckingham Palace elicits the observation: “Here is the bride’s home.” George VI’s statue prompts the reflection “perhaps he’s there in spirit.” “A few weeks ago,” the man ruminates as Mark’s mum and dad turn up, “people might have said, who are *they*?”