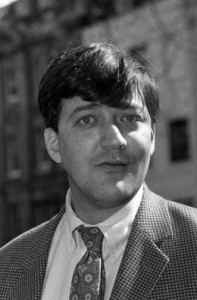 Word reaches TV Cream that Stephen Fry’s Dr Who script, which seems to have been in various states of conjecture and completion for the last five years, is finally going into production.

It will form the eleventh episode of the next series, replacing the story previously announced for that slot, and will serve as a prelude to the two-part series conclusion.

But no matter, for now we can judge for ourselves.

TV Cream has obtained a couple of pages of dialogue from the episode in question. There is no clue as to the title of the story, nor the precise location of the scene. All it is possible to surmise is that it appears to be a conversation between two people, Dr Who and the Black Guardian.

No companion is present, unless you count the third person who makes an entrance one third of the way through.

The omens are good, however. There are no mentions of Rose, Martha or Donna, no aspect of contemporary popular culture shoehorned into proceedings, and not once does the script specify the Doctor to do some gurning.

BLACK GUARDIAN (BG): …and terror will be the order of the day.

DOCTOR WHO (DW): A man of history?

BG: Just as long as it’s the right kind.

DW: Those who seek to make it, invariably find…

DW: (sly) …find the history of tomorrow effortlessly remakes that of the past.

BG: (rakish) I intend to snatch the heart out of that wretched fallacy.

DW: It certainly focuses attention on the hole.

DW: No, the hole. The hole in your otherwise delicately finessed exposition.

BG: (angrily) I wonder, dear boy, if you wouldn’t be so kind as do me the pleasure of waiting until I have finished.

[A man enters with a cup of coffee]

BG: You can’t possibly know the full implications of my proposal while only resting on suppositions.

DW: I thought I felt something.

BG: Silence! Out there….

BG: Out there! The galaxy of which you seem…illogically fond…

BG: …The galaxy I once called into existence and from which millions once travelled for a mere touch of my hem….

DW: Must have been a pretty big hem.

BG: (shouting) It is no wonder your predecessors failed to ever adequately curtail or even surmise the extent of my influence while labouring under such juvenile aspirations of humour.

DW: On the contrary Mr Garboldasham, I find a quip well-aimed at the face of pomposity parallels neatly the consequences of a needle directed towards a pendulous balloon.

DW: No no, I merely know a good prick when I see one.

BG: We seem to have wandered off the subject. Incalculable destruction is timed to begin roughly one hour from now, not 20 miles from here.